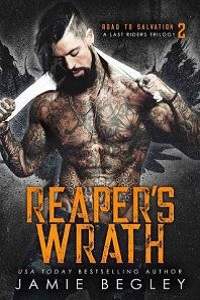 Reaper felt the spell Ginny placed over him break, as the factory door closed behind her. Brushing past Shade, he started for the steps, only managing to get one foot down before Shade called out to him in a mocking voice.

“Where are you going? You just going to leave your bike in parts?”

“I forgot my water bottle in the club. I’ll finish it later.” Disconcerted by Ginny, he could only think of that lame excuse.

Hurrying up the steps past Train, he needed to be inside the club before Ginny exited the factory with Rider. She had rattled his brain and emotions the day before when he heard her singing, and being so close just now put him into the same funky headspace she sent him into yesterday.

Taking the steps two at a time, he reached the porch in record time. Moon, who was watching the door, took one look at his face and opened the door immediately.

Walking through the empty club room, he made his way into the kitchen, bypassing the crowd waiting for breakfast, and headed to the fridge for a bottled water. He’d drank down half the bottle when he saw everyone in the room staring at him.

“Nothing,” Nickel mumbled, switching his gaze to the back of Sasha’s head as they waited their turns to fill their plates.

Deciding to eat before he finished working on his motorcycle, he got in line behind Nickel, telling himself he wasn’t eating just because Ginny could still be in the parking lot. He remained rigid in his spot as Shade and Train came in through the door to stand behind him. At least the brothers were smart enough not to say anything to him as they waited for Nickel to fill his plate.

“Ginny came at the perfect time. Rider’s ass is always first in line, and he never leaves us any bacon.”

Reaper didn’t give a fuck if Train was talking to him or Shade. He didn’t respond, focusing on taking a plate and placing a mound of scrambled eggs on it. “You can have the bacon. I want the waffles. Jewell uses the recipe that Ginny made when she worked for us.” Shade moved from behind him to his side to take a plate.

Taking his fork, Reaper stabbed the two remaining waffles, placing them next to his eggs.

“At least you won’t have to work out in the gym for an hour to work them off,” Train consoled a Shade. Reaper glanced at him out of the corner of his eye; the brother didn’t look upset at having the waffles stolen from him.

“I’ll eat the toast. The jar of jelly that Ginny brought in as gifts is still full ...,” Shade began.

Going farther down the line, Reaper picked up the jar of jelly, placing it in the crook of his arm to carry it into the dining room where he sat at the small table farthest away from everyone. He then concentrated on eating and not on the woman who touched him and stared at him as if her heart were in her eyes.

Lifting a forkful of eggs to his mouth, his hand was shaking so badly the eggs slipped off.

When he saw Train and Shade taking a seat at table close by, Reaper knew they weren’t done trying to get under his guard.

As Shade watched him over the cup of his coffee, Reaper opened the jar of preserves, slathering the waffles with it, before closing the jar tightly. He really didn’t want the sugary fruit for breakfast; he just didn’t want Shade to have it. He wasn’t stupid. The brothers were trying to get a rise out of him about his reaction to their former housekeeper, and they were about to get it if they didn’t watch their steps. He was spoiling for a fight, needing to shake off the myriad of feelings the woman was bringing to life.

He could deal with rage, hatred, and revenge. What he couldn’t deal with was the stirring of desire that freaked him the fuck out.

He was using his fork to cut the waffle when he saw Shade start to get up from the table, his narrowed gaze on the jam. As he braced for the fight he had been trying to provoke, Train placed a hand on Shade’s shoulder, stopping him with a muttered aside that Reaper couldn’t hear.

Shrugging, Shade picked up his dry toast and started eating as his wife and children came in the dining room and took a seat at the table. When her violet gaze landed on the jar on his table, Reaper inwardly groaned.

Rising from the table, Lily approached him, innocently unaware that she just stopped the burgeoning fight between him and Shade. “Excuse me, do you mind if I take the jelly? John finished the one at our house, and I’m trying to get him to eat before he has to go to school.”