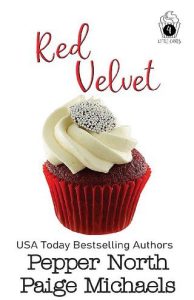 Shibari expert Milo Dante crafts masterful silken rigging. Unfortunately, the eager volunteers trapped in the elaborate knots he creates have never captured his heart. Will the submissive hidden inside Riley be the one he’ll never be able to set free?

“More sprinkles on the way,” Riley announced cheerfully before pushing the swinging door open to enter the Little Cakes’ kitchen. The display cabinet was down to its last rainbow sprinkles cupcake and a toddler and his mother each wanted one of the colorful treats.

As she came back through the door with a heavy tray of more colorful decorations than Riley ever wanted to count, she heard the bakery’s owner, Ellie, chirp, “Hi, Milo!”

Unable to stop herself, Riley checked out his powerful form in the paramedic’s uniform of a T-shirt and pants. That soft cotton clung to his broad chest. Yum! Instant heat she always felt when she saw him at Blaze flared low in her abdomen.

“Hi, Milo. I didn’t know you were an EMT,” Riley said quickly, trying to cover the impact of his appearance.

“Yep. I thought I might see you here today. We’re here to pick up cupcakes for my partner’s wife. This is Tom,” Milo introduced the man with him.

Riley blushed as she realized she hadn’t even noticed Milo was wearing the same uniform as the next man in line. She’d concentrated completely on the man who sent shivers of arousal through her.

“She’s seven months pregnant and I do what I can to make her happy,” Tom reported.

“Smart man. You’ll have to get a cupcake for yourself, too,” Riley encouraged.

“We’d already planned on that,” Tom admitted. “Let me get a dozen to go.” Quickly, he picked out eleven cupcakes to fill a Little Cakes’ dozen treat box almost full. “It’s up to you, Milo, to choose yours.”

“That’s insider information that could provide a security risk,” she answered with a laugh. “Next, you’ll want to know my mother’s maiden name.”

“Very funny,” he commented before lifting one eyebrow quizzically. “You won’t tell me your favorite?”

His brown eyes danced, and she swallowed around the thought of what it might feel like to run her hands through his thick brown hair.

When she shook her head, he probed, “If I choose it, will you tell me?”

“Sure,” she agreed. There was a very slim chance that he’d select the one she loved most.

“Cookies and Cream,” he decided after studying all the choices.

“Yummy, but not my favorite.” Riley added it quickly to the box.

“Maybe I should change my choice,” Milo suggested.

“Sorry, no take-backs,” she said quickly as she secured the top.

“Challenge accepted,” he answered softly for her ears only.

Riley laughed, despite her attempts to keep her distance from the mesmerizing man. “There are a lot of cupcakes to choose from.” She waved a hand at the display counter.

“It’s not a hardship when I get a reward for my visit,” he answered, holding her gaze.

Riley couldn’t think of a snappy comeback to his obvious meaning that he would come to see her.

Coming to her rescue, Ellie chimed in helpfully, “Riley’s here three days a week, but come anytime. We have some regular flavors offered every day. Others rotate. Here’s a list. You can mark them off as you guess.” She handed him a flyer with all the flavor choices.

“Perfect.” As Milo turned to Riley, the polite smile changed to a searing look that kindled in her stomach. “See you next time.” He winked as he turned to leave the shop.

“Those guys were hot,” Sue commented as she wiped off the front of the glass display case. It was an endless job to keep fingerprints from blurring the customers’ choices. The toddler had pressed his sticky hands everywhere as he admired the beautiful cupcakes.

Ellie and Riley looked at the oldest of the female employees working at Little Cakes in astonishment. Sue was usually cheerfully reserved. Of all the employees at Little Cakes, Riley didn’t feel like she had figured Sue out completely. She definitely hadn’t anticipated Sue would ogle male customers.

“What? I have eyes!” Sue protested, provoking delighted giggles from the other women.

“Riley? Can you come chop some chocolate for me?” Ellie asked when their laughter subsided.

Following her boss into the kitchen, Riley washed her hands and put on gloves before grabbing a cutting board and a large knife. She unwrapped the premium chocolate bars, inhaling the bittersweet smell in delight.

“How big do you want the pieces?” Riley asked as Ellie gathered the ingredients for the next cupcake batch.

“Tiny pieces, please. Like slivers. I want the chocolate to blend easily into the frosting as a surprise treat,” Ellie explained.

Riley attacked a stack of three bars. The knife skittered across the board, coming dangerously close to cutting her fingers. “Yikes!” popped out of her mouth as she yanked her hand away to double check that she was okay.