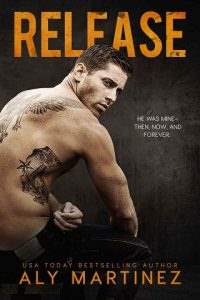 That was how long it had been since my heart took a single beat without a searing pain piercing through my chest.

That was how long it had been since my future exploded, leaving me on my knees, lost in the wreckage.

That was how long he’d been gone.

I lifted my gaze from my watch as Nora’s car slowed to a stop at the guard station. The corrections officer took our driver’s licenses, and Nora prattled off all the usual answers about why we were there. It was the same old song and dance. One I knew well after…

He pressed a button to lift the metal arm and we drove around the corner to the second guard station. That was where my familiarity of the process ended.

I’d never been allowed through the second gate, despite the fact that I’d spent two hours every other week sitting in my car in the parking lot. This time was different though. Nora wasn’t there for a visit. And I wasn’t there to warm the chill in my veins knowing he was somewhere nearby.

“Breathe,” Nora ordered after the guard had instructed her to follow the road around to the side of the building.

I couldn’t breathe though. I could barely keep my heart beating. Vital functions were no longer involuntary but rather an arduous task that made every inhale feel like I was pushing a boulder up a mountain.

He was in there. My Ramsey, the boy who had branded my soul in ways time could never heal.

Tears flooded my vision as I imagined the seventeen-year-old with chocolate-brown eyes and shaggy hair. Ramsey didn’t look like that anymore though. He was almost thirty now, but I still dreamed of him as the tall, lanky boy who had once held me in his arms and loved me with his entire being.

For us, love was the original four-letter word.

I was in fifth grade the first time we heard, “Ramsey and Thea sitting in a tree K-I-S-S-I-N-G.” We were told first comes love, then marriage, then a baby in a baby carriage. No one mentioned that love would also be the most devastating emotion we would ever experience.

As I got older, I heard people preach that love is patient and love is kind. And I could have jumped on that train if the Bible verse didn’t also contain the biggest lie of all: Love never fails.

For Ramsey, it did.

The entire fucking world failed him.

Love was a curse. Make no mistake about it.

But Ramsey was my curse. And there was nothing that could change that. Not even twelve years, eight months, three weeks, four days, twelve hours, and forty, no…forty-one minutes.

Since the judge had banged his gavel, I’d been counting down every excruciating minute leading up to that very moment. Now that it had finally arrived, I was utterly terrified. The what-ifs of our reunion ricocheted in my head like a symphony of nightmares I couldn’t escape.

I had faith though. What Ramsey and I shared was not a light switch that could be turned on or off at will. Our bond was sewn into the very fabric of our lives. Without Ramsey Stewart, there was no Thea Hull. That wasn’t because of some twisted codependent obsession.

I didn’t need him in order to breathe.

I didn’t need him in order to smile.

I didn’t need him in order to be happy.

But under those parameters, I didn’t exactly need my left arm, either.

I wanted him beside me every morning as the first ray of the sun warmed my skin.

I wanted his contagious laugh echoing in my car as we drove out to the hayfield—sometimes to make out, sometimes to sit in unbelievably comfortable silence together.

I wanted to travel the world with him before settling down to have a family the way we had always planned.

Bits and pieces of Ramsey were intertwined in everything I’d ever wanted in life. He was my family. My best friend. The yin to my yang. The heart to my beat. But in the years since he’d been locked away, everything had been on hold. I’d grown up. Gone to college. Started my own business. But nothing was ever the same without having him there to experience it with me.

That wasn’t the way it was supposed to have happened.

We were supposed to get out of Clovert, travel the world hand in hand.

My stomach rolled and my hands shook with a unique mixture of grief, guilt, and pure exhilaration. Over the years, I’d labeled it as the Ramsey Stewart trifecta. For too long, it had devoured me each time someone mentioned his name. And for a small town in Georgia with nothing better to do, people loved to mention his name.