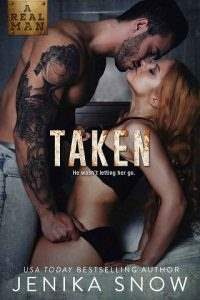 I feel like a fucking Mack truck hit me.

I shift against the cement floor, the cold, damp stone seeping into my bones. I’m so sore I grimace with the movement. I try to pull my hands apart; the cramping of my shoulders and wrists is such an overpowering pain it nearly takes my breath.

I can feel the burn of the ropes against my skin, and although I attempt to fight it, there’s no way to get free. The same harsh rope is cutting into the skin at my ankles. I try to take in my surroundings, but it’s so fucking dark I really can’t make out much. I think I’m in some type of storm cellar. The stench surrounding me is strong. Musty, dirty air is all I can manage to take into my lungs, causing them to burn.

I listen to the noises around me, but it’s just silence. I’m not a man who has much time for fear. I’ve actually never felt it, at least as an adult. If I were ever going to succumb to the emotion however, it would be now.

Still, I beat it down and do my best to remain calm. I try to piece my memories together, and really, that takes much more effort than it should. I left the party at the club early, just wanting to be alone.

We’d just burned Creek’s cut and shared a drink in his memory. The rest of the men were letting off steam, and I just wasn’t in the right frame of mind for that shit. Creek was a good man, and he was gunned down, shot in the back by some fucking coward trying to make a name for himself by bringing down one of us.

The Deadly Scorpions have finally taken over Bastrop, Texas. We have ventured into San Antonio and Houston, making our connections, so we’re set up to run our businesses without being fucked with. It hasn’t been easy, and it’s been bloody, but I had mistakenly thought the worst was over. Creek’s death was proof I was wrong. As President of the club, I feel the weight of Creek’s death more than others. My brother trusted me, put his life in my hands, and I fucking let him down.

That’s why I left early. I just needed to be alone and grieve. I got out to my bike, felt this sharp pain at the back of my head, and then the world went black.

All of that tells me absolutely nothing about why I’m here or how to get free.

I’m left here wondering if whoever did this will show his face.

If he does, I can only hope like hell I get an opening to get free. It would help if I wasn’t tied up like a fucking prized calf at a rodeo. I don’t know how I’m going to solve that problem, but hopefully I’ll figure something out quick.

My stepfather is an idiot.

I’ve said that a million times, but I’ve never meant it more than I do right now. I watch as he staggers around outside, completely blown out of his mind. He’s been high since he got back from San Antonio—or wherever he went. He wasn’t exactly coherent when he told me he was leaving. He kept mumbling something about celebrating, because he was finally going to get revenge on the man who ruined his business.

My stepfather isn’t a banker or anything like that, by the way. He’s not even a mechanic. The business he keeps grieving about is drugs. Albert “Einstein” Mays is about as small as a smalltime drug runner can get. He had a few junkies working under him and did his best to supply the east side of Houston in crystal.

I should have left him alone to die years ago. I may only be twenty-one, but even I know Einstein is going to wind up dead, either by OD’ing on his own drugs or at the hands of someone he fucked over. I can’t leave however. Leaving, would mean abandoning the one person who has always loved me.

Mama Emmaline isn’t really my mother. Sadly, she’s the mother of Einstein, but even she will tell you she has no idea how that happened. Emmaline is the type of person to give you the shirt off her back. Her son is the complete opposite. Still, from the minute my worthless mother got messed up with Einstein, Mama Emmaline took me under her wing. She loved me, protected me, and did all the things my mother failed to do. When my mother died of a heroin overdose two years ago, it was Mama who held me, let me cry, and did her best to put me back together again. She was going to take me away from here, away from Einstein, and we were going to start over, have a better life, just the two of us.