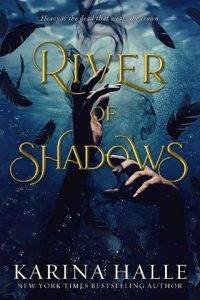 “We come from the land of the ice and snow, where the midnight sun and the hot springs flow,” Robert Plant sings through my noise-canceling headphones as the plane begins its descent. My music choice was certainly apt since there’s nothing but ice and snow for miles. I don’t even see the town of Ivalo, let alone the airport where we’re supposed to be landing shortly. There’re just low rolling hills of white until they blend in with the monotone sky, like we’re flying into nothingness.

A flutter of panic forms in my chest and I immediately grip my armrest, my eyes pinching shut. I’m lucky no one’s seated next to me on this Finnair flight from Helsinki up to Lapland because I’ve been riding the Hot Mess Express the whole time. One minute, tears are streaming down my face, lost in grief and regret over my father, the next I’m having a full-on panic attack, wondering what the hell I’m doing, flying to not only Finland, but the remote north of the country, all by myself. I’m no stranger to taking flights alone—it’s a part of my job—but this time it’s different. My mother refused to come to my father’s funeral, and I’m an only child, which means I have to carry the burden without any support. I’ve never even been to a funeral before.

At least I’ve been to Finland, though this is my first time in Lapland. I was actually born in the town of Savonlinna, but my mother left my father when I was only six years old, ushering me off to California. I don’t remember much of my childhood in Finland, and my only other visits were every other summer when growing up. My father fought long and hard to see me when he could, and I later learned that it was only when he threatened my mother with a custody battle that she relented and let me visit.

Suddenly a memory floods my mind, making my heart feel waterlogged. I had been staying with my father at his lakeside cottage where he lived, having just come in from a refreshing near midnight swim. Despite the hour, the sun was still shining, as it does in the summer months, and the air was thick with dragonflies that buzzed about on kaleidoscope wings, nipping at the mosquitos.

I walked along the dock, a towel draped around me, wet footprints in my wake, wondering where my father had gone, when suddenly he appeared in the doorway to the cottage.

Only he was pretending to be someone else. Santa Claus.

My father is…was one of those people, like Leslie Neilson or Christopher Lloyd, who always looked old with his prematurely white hair and beard, so he suited the role perfectly. He stood there in the waning golden light of the summer sun, dressed in the red velvet Santa suit, a sack full of toys beside him.

I was about eight or nine years old, old enough to not believe in Santa Claus anymore. And even if I had, it would have given me a major pause to have Santa come visit during the summer. But I know from the letters my father would write me (my mother didn’t let us talk on the phone very often), that he missed having me around at Christmas, especially since Finland is Santa’s home, and so I played along happily, reveling in his attention, and the toys and treats of course.

It was my father’s colleague, Noora, who had made the call a week ago. She told me that my father had gone for a walk in the woods and somehow became disoriented. A search party found him the next day, coated in ice and snow. Dead.

The news didn’t seem real at the time. To be honest, it still doesn’t. It feels like those two worlds are still intermingling with each other, and I keep being bounced around and I never know where I’ll land. Sometimes I just wish that the grief would set like cement, because the moments where the reality crashes upon me can be too difficult to bear. I’d rather be stuck in the thick of it, all the time, as real and raw as possible, as if I could get the pain over with.

People assumed that because I rarely saw or spoke to my father that we didn’t have a close relationship, but the strange thing is that, despite the distance, I felt closer to him than my mother. It’s like we had our own silent language, or some kind of magnetic tie between us that kept us connected throughout my life. I always felt him with me, felt his love, even when we were technically estranged.