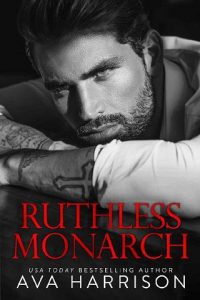 I can smell death in the air. Its pungent aroma thick and heavy in my nostrils as I amble across the warehouse.

Each step through the crimson terrain reminds me of all I lost and why I am here now.

Fuck, even my brother died.

The war to maintain my family’s control over the East Coast has been long, bloody, and jam-packed with casualties.

I know this reprieve from violence won’t last long. Another enemy is always lurking in the shadows.

The underworld is like the Hydra. You cut off one head, and two more grow in its place.

I know this time is no different. I need to prepare for war.

There has been a lull for the past few months.

I pay a great deal of money to be apprised of my cousin’s dealings.

Ever since my father died, and I was put in charge.

He believed he should have been the one to take over.

Deeming me not the rightful heir.

Technically, he’s not wrong. Had his father lived, this kingdom would have been his.

But regardless of what could have been, I’m in charge and the best option.

At thirty-five, I have already lived more than most. I had been raised half my life to take over my family’s business.

On the books, we own a legitimate enterprise.

Behind that, we own everything.

The door swings open, and in walks my right-hand man and cousin, Lorenzo.

His dark eyes are narrowed. As soon as they look at me, I know something is wrong. The thing about him is that he doesn’t just work for me. He’s like a brother, which is why I’m already on edge with the rigid, cold stare he gives.

“Nothing good,” he states, and the customary humor he only allows himself to show me is gone.

“What the fuck does that mean?” I draw in a deep breath, trying to calm myself down, but no amount of oxygen will fix this. I should have killed that fuck when I had a chance. Maybe it’s not too late.

“What do you think that means for us?”

I lean back in my chair, a bitter smile on my lips.

“We need to take him out before he succeeds.”

Despite everything I thought, I lost Chicago.

That was enough to send my ego and bloodthirst spinning. But that wasn’t all. Salvatore is rumored to be making another play for the East Coast.

This is where it stops.

The East Coast is mine.

I don’t give a fuck who he thinks he is. I won’t let him take it from me.

The door to my office swings open. The sound of Italian loafers hitting the marble ricochets through the room.

I don’t have to look up to know it’s Lorenzo, and by the way he stomps in, it’s not good.

“What now?” I lift my head from the papers I’m looking over and see his scowl. In the year that has passed, he’s grown up a lot, and is no longer the happy-go-lucky bastard he once was.

Lorenzo runs his hands over his face, heaving out a long-suffering sigh. “I’m not going to lie to you, it’s bad.”

“Gotta get our shit together, bad. While we were focused on holding ties with the Irish, Salvatore was focusing on our own backyard.”

My knuckles turn white as I grasp my chrome desk, on the verge of fucking bending it completely. “Don’t talk in riddles, Lorenzo. Spit it out.”

There is a stillness to the room at his words, followed by silence.

My fist slams down on the table, cutting through the heavy tension lingering in the air. Lorenzo doesn’t jump back, but he winces, aware of how thoroughly and mercilessly fucked we are.

Frank Marino, the Governor of New Jersey, has always been a thorn in my side. Ever since he rejected my proposal for port access and I had to go above him and work with the governor of New York, we have not gotten along. That, coupled by the fact I know of his past business dealings with my deceased uncle, leaves no love lost between us. But to know my cousin has anything to do with him is even worse.

Lorenzo shakes his head, and I know what he’s about to tell me is going to be bad. There is a tenseness to his shoulders, one that’s often not present. No one else would notice, but to me, Lorenzo is an open book. The same goes for him about me. It makes everything much easier in certain situations that we can speak without words.