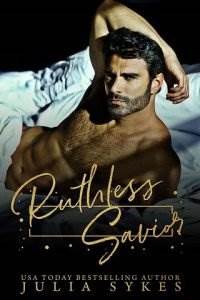 In my next breath, I would either start a war between the two most powerful cartels in Mexico, or I would resign myself to a hellish existence as a cruel man’s captive. My freedom was within my grasp. All I had to do was agree to help with one small, essential task. Then, the bloodshed would begin.

And what would my fierce captor do to me if he discovered my betrayal before I could run away to safety? Raúl’s hard, jade green eyes flashed through my thoughts, sending a shiver down my spine. Just the memory of his forbidding scowl was intimidating enough to make my knees weak.

“If you’re afraid of Raúl Guerrero, don’t be,” my would-be accomplice, Daniel Vera, said with a dismissive shrug. Daniel might be one of the most influential men in the cartel, but he was young and arrogant to the point of stupidity. Anyone with half a brain would fear Raúl.

“Guerrero will probably be dead by sunset,” Daniel reassured me, his cocky smirk emphasizing the sparseness of the beard he’d attempted to grow. “Even if he manages to survive the night, he won’t last long. He won’t be able to come after you.”

The thought of my captor dead because of my actions—his dark eyes flat and his stony features slack—made my stomach turn.

I swallowed down my nausea. Raúl was a criminal, and I’d seen him do monstrous things. I shouldn’t feel sick over the prospect of his death. The world would be a safer place without him in it.

Raúl can take care of himself, I reasoned. I wouldn’t be responsible for his demise. He’ll survive.

I just had to be far, far away from him by morning. As long as I was out of his reach, he’d be too busy with his criminal power struggle to waste time coming after me. Especially if I was no longer a significant hostage.

Because I wasn’t betraying Raúl solely to secure my own freedom; Carmen Ronaldo was in a far more dire situation than me, locked in the penthouse ten floors above. For weeks, the captive cartel princess had been subjected to an insane drug lord’s possessive lust. I couldn’t leave her trapped in that hell, not when I knew the agony she suffered at Stefano Duarte’s hands every day.

“You can stay with me,” Daniel offered, his oily grin belying the reassurance in his tone. “I know you want to escape from Guerrero, but you don’t have to risk going on the run by yourself. It’s dangerous for a pretty woman like you to be out there all alone.” He stepped toward me, ignoring my attempt to shrink away. He advanced until my back hit the wall. “Come home with me. I’ll protect you.”

His hands bracketed my hips, trapping me. My chest tightened, and my fists clenched at my sides. I took a quick breath and forced them to unfurl, offering no resistance. Whatever happened next, I could endure it. All that mattered was getting Carmen to safety and securing my own freedom. I wouldn’t risk that by lashing out at Daniel, even though his unwelcome touch stirred old nightmares.

“I’ll help you access Duarte’s penthouse and free Carmen, so you can take her to her allies,” I promised on a whisper. Declaring my betrayal aloud put me in far more danger than what I might face in the world outside this drug lord’s fortress, but it was Daniel’s suffocating nearness that robbed the forcefulness from my words. His heavy cologne smothered my senses, the sickly amber scent thickening the air to molasses.

“And after that?” he prompted, one hand skimming up my side to paw at my chest. “Will you come home with me? Guerrero’s been guarding you like a rabid dog, but he can’t keep you from me now. Once he’s dead, I’ll give you a safe place to stay. You won’t be forced to work as Carmen’s maid anymore. You’re too pretty to be wasted scrubbing floors.”

I closed my eyes and sucked in a lungful of sticky-sweet oxygen. The heat of his groping hands seared my flesh, layering over the toxic taint that other men had branded into me. I hadn’t felt a monster’s violating touch in the weeks since Raúl had taken me as his hostage. My captor was beastly, but in a perverse way, his fierce captivity had started to feel like protection. No one had dared to come near me while Raúl was my jailor, and beyond all reason, he’d never forced himself on me.

No matter how often his granite jaw sharpened with unmistakable hunger, no matter how many times his massive body flexed with the impulse to claim me, he’d always restrained himself. He honored the promise he’d made to his boss on the night I’d been taken: No one touches her. I’ll see to it myself.