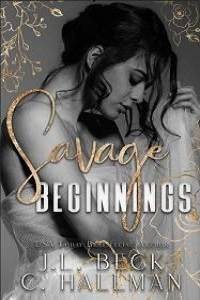 Slipping into my nightgown, I sit down on the edge of the bed and finish drying my dark hair while humming some pop song I heard on the radio earlier.

I’ve asked my father numerous times for a cell phone or laptop, but he swears it’s for my own protection that I have neither, so the radio is all I’ve got. Dropping the towel, a shiver skates down my spine when my long wet hair brushes over my shoulder.

Bending down, I reach for the towel. Before my fingers even touch it, a deafening knock booms through the room. It’s so loud and unexpected that a tiny shriek passes my lips.

Who the hell is that?

I glance at the clock on the wall and realize it’s after eleven. My father never calls for me this late, and besides him, who could it be? No one, that’s who. Since my mom’s death two years ago, my dad is the only person I have left. I have no other family and no friends, thanks to my father’s overbearing nature.

I wasn’t even allowed to go to school because he deemed it too dangerous for his little girl. Everything I’ve ever learned was taught to me through homeschooling. Covering my chest with one arm, I open the door and find Richi, one of my father’s personal guards, on the other side.

“Miss Elena, your father wants to see you in his study.” There is a strange look on his face, a mixture of fear and remorse. He’s never looked at me in such a way. Seeing how uncomfortable he appears to be makes me suspicious.

“Now?” I ask, still a little shocked, given the time. “Is something wrong?”

“Just come with me, please.”

“I’m afraid there is no time for that,” a deep, penetrating voice comes from behind the door, filling my ears. Opening the door a little wider so I can see who that voice belongs to, I almost gasp. There’s a man in a suit, a man I’ve never seen before, standing beside Richi.

In the dim light, it’s hard to make out the man, but from what I can see, he looks down-right sinister. His gaze pierces mine, and his lips press into a thin line, impatience rolling off of him in waves.

Now I’m really worried, why is a man I’ve never seen or met before inside our estate, much less outside my bedroom door.

“What’s going on?” I try to hide the panic from my voice, but even I can hear how nervous I am.

“Just come downstairs, Miss, enough with the questions,” the unknown man orders, and I know there is no sense in arguing. When you’re told to do something, you do it, that’s what my father always said. If my father has asked for me, then surely this is safe.

Crossing my arms over my chest, I step out into the hallway and grit my teeth at the cold that kisses my bare feet. Goosebumps spread out across my skin as I walk between the two men, wearing nothing but some panties and a thin nightgown. I really wish they would have let me put some clothes on. This is no way to greet my father or any visitors.

The walk to my father’s study seems to drag on, but when we reach the heavy wooden door, it doesn’t feel long enough. I don’t know what’s going on yet, but I do know it’s not good, and I’m not ready for it. My gut tightens with the unknown. I’ve had enough heartache in the last few years to last me a lifetime.

Looking up at the door, I don’t bother knocking, knowing that my father is expecting me. Reaching for the knob, I pause for one more second, mentally preparing for whatever awaits me on the other side. I’m not sure why, but I glance back at Richi and the unknown guy. Both look at me with blank expressions, which is nothing new to me. My father’s men are all trained to look at me like that. No emotions. Feelings get you killed.

Sucking in one last breath, I push the door open and take a step inside.

As soon as I catch a glimpse of what’s beyond the door, I want to retreat from the room. It’s a reflex, really.

Since I was a little girl, my father had trained me, told me to never listen to him, and his associates talk. To never listen to anything regarding his business. So, when I see him and three men in his office, I have this deep primal instinct to go in the opposite direction.

“Elena, come in,” my father says, his tone clipped.