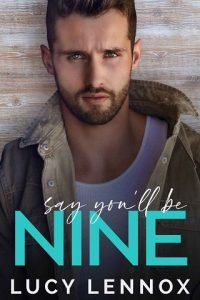 “Nine will help you carry those out to the car.”

I glanced up and smiled while Walt handed Mr. Purcell his change. Mr. Purcell was one of several customers who still paid in cash, even when he was shelling out for half a pallet of potting soil like he was today. Walt’s assurance of my help was one I’d heard thousands of times in my life.

Nine will help. Nine will carry that. Nine will do that for you. It was a familiar refrain both at work and at my family’s farm.

As I made my way to the front of the store, I ignored the buzz of my phone in my pocket. My mother had been messaging me all day to remind me of the leaky bathroom faucet she needed me to fix after work, and my brother Eli was no doubt texting me to remind me it was my turn to buy beer for poker night this weekend. As if I’d forget. The first Friday of the month was my night to buy beer. Lord only knew why I drew the first Friday when I was the last boy out of the ten of us, but there it was. It was fine. I didn’t complain. I never complained, and I always helped out.

It was what I was known for, and honestly, I enjoyed helping people. I liked knowing something I did made someone else’s life easier.

Mr. Purcell turned to me with a smile. “There he is. Been recording any more of them videos for me? I was hoping you might do one on repairing roof flashing. Now that the weather’s turning, I’d like to get up there and patch everything. Be great if I could do it myself without having to call in John over at the roofing company, you know?”

I gathered up several of the bags of potting soil from the counter and threw them over my shoulder. “I did the one on switching out your door locks like you asked, but I haven’t done any roofing ones yet.”

“Oh! Well if you did the door locks, let me go back in and pick those up and I’ll get ’em knocked out this afternoon. I’d like to break off my key every time that damned thing jams up.”

He opened the rear hatch in his old Suburban, and I loaded the bags of soil before turning to get the remaining bags of soil, seeds, and starter pots he’d purchased. I pointed him in the direction of the locks and told him I’d be right there to make sure he got the right items. As soon as I’d closed his SUV up, I joined him on aisle four.

“Didn’t you say you needed one for the tool shed too?” I asked, scratching the back of my neck and trying to remember our conversation from a few weeks ago. “Oh, and Debbie’s place now that Nate left. Can’t be too careful after a breakup.”

Mr. Purcell snapped his fingers. “Damned right, Nine. Thank you. I tried to get her to move back home with her mom and me, but you know how girls can be. Stubbornly independent, that’s how.” He reached for the set I pointed out. “Hey, speaking of independent women, I saw your sister working a shift at the hospital. She’s pregnant again, isn’t she?”

“Yes, sir. Beth and Matt are expecting their third. You can imagine my mom is thrilled. Already knitting up a storm. This will be her seventh grandchild.”

His eyes sparkled. I already knew that half the items he’d purchased today were to help his own grandson with a 4-H project. The Purcells were as close as my own crazy family. “What about you, Nine? When are you going to join the club and start making your mama happy?” he asked with a wink, but I knew he was serious. I was only twenty-four, but because my oldest brother was thirty-seven, people tended to think of me as somehow way behind the eight ball when it came to settling down.

I swallowed. I’d never been all that comfortable with personal questions and being the center of attention. “Well, sir. I guess when the right woman comes along. In the meantime I’m pretty happy with just me and Nacho, you know?”

The dog heard his name and perked his head up behind the checkout counter. I heard the telltale jingle of his collar and tags.

Mr. Purcell laughed. “Man needs more than the love of a good dog, son. You oughta ask out that new girl who works at the diner. Debbie said she’s a sweetheart, not like that woman who married the vet. She’s a piece of work if you don’t mind my saying.”

I did mind him saying. Lauren had been nice enough when we’d dated, and I knew for a fact she was happy as a clam now that she was with Eric Pender. It had turned out for the best all around when she’d dumped me for the new “doctor” in town. I got more time to make my how-to videos, and she got to do her pageant wave in the town parade with a nice big rock on her finger.