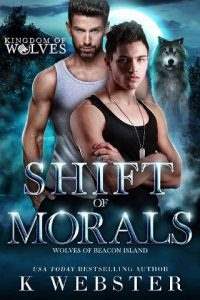 Death is in the air.

Not heavy and thick and satisfying like after a hunt.

Faint. Barely a breeze. Nothing but a sweet whiff tickling my nostrils.

I’m exhausted after the full moon, bones aching from the change, a transformation that threatens to do my head in anytime I consider the physical mechanics of it. I can hear Finnick’s laughter nearby as he teases Judd and Ewan. Rey snaps at him to behave, but he never does.

We’d barely dragged ourselves into my cabin last night, the five of us an unusual group but as tight and bonded as any other pack, and are just coming out of our feral haze.

The full moon is always taxing both physically and mentally. It’s when we give in to our baser instincts and needs—running, hunting, stalking, devouring, fucking like wild animals. It’s the time of the month where we shed our normal human skins both literally and figuratively to become the being that lives deep within us. We free those proverbial chains and let loose for a night. By morning, it’s back to responsibilities and normalcy, though sometimes the wolf within still buzzes with energy, not quite satisfied but not unhappy either. The others fall back into routine much easier than I do. My wolf lingers, gently raking his claws across the dark edges of my consciousness, reminding me he’s still there—he’s always there. His senses are sharp and refined from years of experience. Sometimes I’m not eager to return to Cyrus Hames and leave the lines between beast and man open, still crackling with awareness and need.

I roll over in bed, my cock hard and exposed to the chilly air. Lightly, I stroke it, making the Alpha within rumble with need when I get another whiff.

It makes me wonder if my wolf decided to hunt the doe and her fawn I’d seen yesterday morning on the edge of my property. The doe had looked up at me as I drank my coffee, her entire body tensing as she sensed the predator in her presence, and took off in a flash. The fawn clumsily chased after her. Being so close to the full moon, I’d thrummed with the need to follow after them, digging deep grooves into my porch chair with my fingernails. Rather than indulging my baser instincts early, I remained seated, sipping the bitter brew that no longer tasted like hazelnut and cream but something akin to dirt.

All thoughts home in on the sound. So far away. So frightened. So weak. Unlike anything I’ve ever heard. The man wars with the beast within. The Alpha rumbles, imploring me to take my worthless human legs and hunt out the source of the sound.

He makes a snuffling sound of annoyance when I continue to stroke my dick, eager to come and chase away the remnants of last night as exhaustion truly overtakes me. As I near the edge, though, I hear it again. My wolf’s ears perk at the sound, and my claws pierce the flesh of my fingertips, threatening another change. The last thing I want is to change with my dick in my hand. I release it with a huff, bringing my hand up to inspect the claws poking out.

Young wolves have trouble controlling their shift. It’s why packs stick to the outskirts of town, protecting their own from outsiders. An untimely change could have a terrible result. Some shifters have been known to get shot by people they know, love, and trust as they’re mistaken for a wild animal that will tear their loved one to pieces.

I’m not a young wolf.

I am the Alpha of the Beacon Island pack.

I’m not uncontrolled or wild or reckless.

So why the change, Cy?

I sit up in bed, irritation burning through me hot and violent. Judd is the first to reach out. He always is. I sense his worry washing over me like a cool rain shower. Rey is next, her burst of warmth always chasing away his chill. Finnick, despite being the clown of our group, ripples in with the force of a hurricane, and it’s Ewan who vines us all together, tugging us tight until we’re whole.

Because my pack is tied to me, I don’t have to speak or explain. I just dress, throwing on my clothes as quickly as possible. I’ve barely yanked my boots on my feet before I take off out the side door of my bedroom. Fog is thick in the air, but the scent of death is strong.

Alarm splinters through me, agitating the wolf and worrying my Betas. Their voices and footsteps thud behind me, each of them racing to have my back. With each step, the scent of death grows stronger, and it’s laced with deep grief.