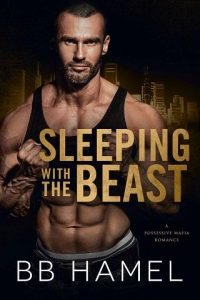 I stepped into the Leone family’s stupidly fancy foyer with blood still caking my right fist when I first saw her leaning up against the banister like she owned the place.

She looked at me with this lazy expression, like she couldn’t care less about anything around her. She had long, dark hair, hanging down around her shoulders, and wide blue eyes that seemed to sparkle in the low light; her clothes were clean, comfortable, fastidious, like she’d spent a lot of time getting dressed; and her arms were crossed over her chest protectively. I let my gaze slide down along her hips, lingered on her shoes—sneakers, I didn’t know why I noticed that, but it felt strange to see sneakers in the middle of that house, with all that money around, and so much expensive crap waiting to be grabbed—then back up to her eyes, holding her return gaze. She arched one eyebrow, and I wanted to say something, but was interrupted by Floyd, that moron.

“You’re getting blood on the tile, man.”

I looked at him for a second, then down at the floor. I was dripping blood from somewhere, and checked myself before realizing I had a cut down my arm, probably from when that guy pulled a knife. I hadn’t even noticed, but it dripped down the sleeve of my jacket in small puddling drops.

I put my other hand over the wound to stop the bleeding. “Someone will clean it up eventually,” I said, glancing at her again.

She had a little smile on her face.

“Come on, man, you can’t just stand there bleeding all over the floor.” Floyd looked like he was about to flip.

“Press it against the wound.”

I sighed, stripped off the jacket, wadded it up, and used it as a bandage. My arms were bare and I wore a tight black t-shirt. She let her eyes roam down my chest, and I felt seen—and liked it.

“Where the hell is he?” I grunted, getting impatient. We’d been let in by that butler guy, I forgot his name already, and told to wait in the foyer. We stood there like morons for a few minutes as she drifted down the steps, not saying a word, staring at us. I hadn’t seen her around before, and I figured she was one of the Leone girls, maybe a cousin or some shit.

“He’ll be here, man.” Floyd started pacing. He was a small guy, compact, built like a bullfighter with thick legs and no neck. He was my best muscle, the sort of guy that loved getting into a scrap and didn’t much care if anyone walked away from it alive. Handy in a fight, but sort of dull otherwise.

I went to tell him to quit pacing, he was tracking dirt all over the floor, when Vincent appeared at the end of the far hall. He strode toward us, a little smile on his face, and I plastered a smile on mine. As soon as he stepped into the room, I noticed she turned and strode back upstairs without a word, not glancing back, and I got the feeling that she didn’t love the head of the Leone crime family—didn’t love him one bit.

Not that I could blame her. Vincent was a tough man, prone to emotional outbursts, though smart and shrewd in his own way. Anyone close to him said he was a good guy, and maybe they were right, but all I ever saw was a rich boy trying to play a tough man’s game.

“Ren,” Vincent said, smiling at me, then nodded at the jacket. “What happened?”

“Guy had a knife,” I said, shrugging. “Didn’t notice it until now. Sorry about the floor.”

He waved a hand. “Don’t worry. Are they taken care of?”

“They’re hurt like hell, if that’s what you mean,” Floyd said with a huge grin. “Kicked their ass. Beat them to hell. Took this one guy, smashed his teeth in so bad—”

“I get the idea,” Vincent said. “I assume they look worse than you two.”

Vincent hesitated. “You sure?”

“Not sure. But Floyd here didn’t go easy.”

“He ain’t dead,” Floyd said, but didn’t sound sure, not even a little bit. He’d hit the guy so many times, the bastard stopped moving, and might’ve stopped breathing. I couldn’t get a good look, since I had my own problem to take care of.

I didn’t get into the scalp game all that often. Muscle guys like Floyd took that work all the time, but I preferred a good steal over a good fight. For my money, nothing beat breaking into a place you didn’t belong and leaving with something that wasn’t yours. I made my living from a young age picking locks, smashing windows, and sneaking around as quietly as I could, lifting only what was necessary, and never getting caught. I was a good thief, but thieving only went so far.