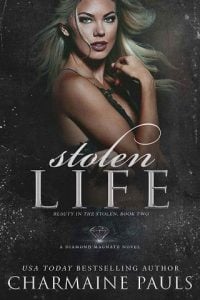 Some will find it strange to see a man carrying an unconscious woman in his arms. Not so if that man is me. I’m a criminal, the most wanted man on the continent, and this time I stole myself not money or jewels but a woman.

I knew she was made for me from the moment I laid my eyes on her at Sun City while the heist was going down. I told her so in no uncertain terms when I claimed and marked her even as I prepared to leave her, because a man like me is forever on the run.

Then I went back for more. I couldn’t stay away. Lusting after her cost me. I paid a heavy price for a night with her. I got myself shot and left DNA behind. The police have photos of us. They know my identity. They no doubt scared her shitless when they took her in for questioning, but I told her I was coming for her. I’ll never throw her to the wolves. Yet she outsmarted the biker I commissioned to bring her to meet me at the airport, stole his bike, and tried to run from me.

It’s not going to happen. I thought I could let her go, but when I stood in front of the door of the hotel room in which she was hiding, I could only do what was always destined to happen. I could only steal more, not simply a few more hours of her time but her life.

I’m taking her home with me.

The pilot is waiting and the plane ready for takeoff when we arrive at the Wonderboom Airport outside Pretoria. Cas passed out sooner than I hoped, but it’s already dark outside, and there’s no one around to see me carry her unconscious form to the plane.

It’s the drug I gave her after she fought me like a lioness.

Walter, the guy I paid to keep an eye on her, leaves after dropping us off with my promise that payment will be in his bank account in twenty-four hours. He knows I’m good for my word. It’s not the first time we do business.

“She okay?” the pilot asks, shooting a worried glance over his shoulder as I secure Cas’s safety belt.

The look I cut him tells him to mind his own fucking business, and he turns away quickly.

I let her limp body rest against my side and support her with an arm around her shoulder for the takeoff.

“There’s a storm building,” the pilot says over the noise of the engine, not looking at me this time. “Do you want to divert?”

I tighten my arm around Cas. “How bad?”

“We should be able to make it if the current weather prediction holds.”

It takes a second to make up my mind. “Go for it.”

“If it gets worse, we won’t have a choice but to divert to Polokwane.”

I acknowledge with silence but pray the weather will play in our favor. Every minute we’re on South African soil is a minute closer to getting caught. There won’t be any deals for Cas. Not any longer. She’s chosen sides, as per my making. Wherever I go now, whether it’s up or down, I’m dragging her with me.

Peeling back her eyelid, I check the pupil. The black is dilated, but not overly so. I move her handbag that’s pressed between us to make sure she’s comfortable.

A good hour into the flight, we hit the thunderstorm. Lightning cuts open the sky and raindrops the size of four-carat diamonds pelt the windscreen. A thin trickle of water runs underneath the glass onto the dash. The pilot tears paper towels from a roll and sticks them against the windscreen to stop the leak.

For the first time in my life, I fear in spades. Not for me, but for the woman I’m towing along. The plane rattles as lightning crashes on the left. I see the flash three seconds before I hear the sound. That means it’s close.

I don’t bother the pilot with meaningless questions. His knuckles are white from how hard he’s clenching the yoke. I let him concentrate on navigating the storm while I rub a hand over Cas’s arm. I take her hand in mine. Her skin is cold, too cold for my liking. It bothers me, even if I know it’s a side-effect of the tranquilizer.

I’m torn. On the one hand, I would’ve preferred not to drug her. On the other, I feel better not submitting her to the stress of being abducted to a different country and a place she doesn’t know.

The plane drops as it hits an air pocket, startling me from my thoughts. The aircraft hits a second pocket, the drop significant enough to make my stomach climb into my throat. Only the seatbelts prevent our heads from bumping against the ceiling. Another few minutes, and we break through the cluster of clouds and hit a clear night sky.