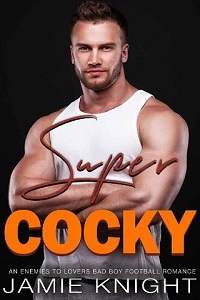 I’m used to tough opponents.
But gorgeous Joanne is giving me the cold shoulder.
When all I want to do is warm her up.

As a football player, women usually throw themselves at me.
But Joanne thinks I’m cocky and keeps her distance.
All because she’s mad I’m selling the flower shop she works at.
It’s just one of many things Dad left me when he passed.
And I want to get rid of it all because of bad memories.
Plus, who ever heard of an NFL player running a f*cking flower shop?
But Joanne wants me to keep it and I might have to give her her way.

I’m no stranger to taking risks.
But will I blow my plans wide open for Joanne?

Super Cocky is a HOT and LONG (over 75,000 words!) enemies to lovers bad boy football romance novel. It’s the eighth book in the Super in Love series which are standalone romances that share the same setting/team. It will warm your heart and melt your panties! Jamie Knight always promises to bring you a happily ever after filled with plenty of heat. And never any cheating or cliffhangers!

“Not bad,” I said out loud, taking a step back to admire my handiwork. “Not bad at all.”

The bouquet of tulips in front of me might not have seemed like much, but it was colorful and vibrant, and I couldn’t help but smile as I looked at it. I’d carefully chosen every bloom, and each one was perfect—but all in different ways.

Some were still tightly closed, just waiting for the right amount of light and nourishment that would give them the chance to open up and become little works of art. Others were fully in bloom, bright red and soft pink and sunny yellow, each color distinct and unique but somehow still able to blend together beautifully. And then there were a few that were somewhere in between those two stages—not quite new buds but still hinting at the promise of what they would become.

Altogether, the effect was beautiful and mesmerizing, and I could’ve happily let myself get lost in the moment admiring it. That feeling—that giddy rush I always felt whenever I completed a bouquet—whenever I brought the vision in my mind’s eye to life—was something that would never get old, no matter how many times I experienced it over the years.

It was a feeling that was hard to describe and even more difficult to replicate, and in a job that didn’t have a lot of monetary perks, it was its own kind of bonus.

I looked up as the bell above the door jingled, still smiling from my little creative high.

That was another benefit to working customer service in a flower shop—even on demanding days, it was hard to be in a bad mood when I was surrounded by so much beauty.

And even with the more… difficult customers, I liked to think of it as a personal challenge to find an arrangement that was just right for their personality and specific event.

No matter what a person was going through—a birth, a graduation, a wedding, a death—flowers were there, providing hope and comfort and the promise of a new day. As far as I was concerned, the least I could do was spend the time to get it right.

It wasn’t a customer at the door this time, though, and my smile widened when I recognized my friend and coworker, Naomi, back from her afternoon deliveries.

“Looks like we made it through another day,” Naomi said, grinning as she plopped down onto the wobbly three-legged stool behind the counter. “Mrs. Linley said that arrangement of Shasta daisies with the Echinacea you did was the prettiest thing she’s seen in a long time.”

I gave a wry smile as I recalled her constructive criticism of my first few arrangements. I’d come a long way in the six years since then, but she still kept me on my toes. I was pretty sure she enjoyed offering her opinion on the completed arrangement at least as much as she liked the actual flowers.

Probably more, if I was being honest.

Naomi shrugged and popped a piece of candy into her mouth. “She was even more talkative than normal this time. Asked how we’d been holding up for the past few weeks.”

My eyes tracked to the small dish of candy—old people candy, as Naomi liked to call it—and thought of Henry.

Having the candy on hand was one of the little things that Henry had always insisted on. The man had had a sweet tooth that was almost never satisfied, and he’d enjoyed sharing with whoever came through the door.

I wasn’t sure what I would do when the candy was gone. I wasn’t even sure where Henry had bought the little chewy squares with their orange and black wrappers. Still, I couldn’t imagine not having it on the counter anymore.

It wasn’t my decision to make, though. That was just one of the many details that would ultimately be up to Henry’s son once he finally showed up and took over.

Until then, I saw it as my responsibility to keep things running smoothly. I had to treat everything as if Henry had just stepped out to run some errands and might return any minute.

And if that thought gave me a little extra comfort in the days and weeks that had passed since Henry’s death, that wasn’t so bad, was it? These days, I would take whatever small amount of comfort life threw my way.

I cast a quick look back at the newly arranged bouquet of tulips, still sitting on the work table like a beacon of happiness. It might just be another little bit of comfort to get me through the afternoon, but it had still fulfilled its purpose. It had put a smile on my face.

“What did you tell Mrs. Linley?” I asked finally, pushing the candy dish out of the way with a look as Naomi reached for another piece. “Let’s maybe save some for the customers, hm?”