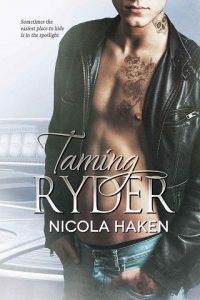 IN PURE FRUSTRATION, I threw a hand over my face for what must’ve been the fortieth time today.

“There any more waitin’ outside?” I asked Xander, pinching the bridge of my nose. We’d been holding auditions all morning, and so far all we’d seen were a bunch of wannabes after a quick buck – most of whom, hadn’t even jacked off in front of a mirror let alone a camera. This was why I’d never held open auditions before, but I’d also never needed to bring in new followers as much as I did now either.

“Just one. Ryder Richardson,” Xander told me, running his finger down the list in front of him.

“Well, might as well see him now he’s here.” Really, I just wanted to give up and go home, but the kid had been waiting for hours so it was only fair to give him a shot.

Xander got up and strolled slowly toward the door, sighing as he did so. He was clearly as disappointed as I was that today had been a giant waste of our time. When he opened the door, in walked a confident-looking young man with visible tattoos and an attitude you could feel without him even having to speak.

“Ryder?” I asked, studying his body through his clothes. He had a unique style – baggy jeans, ripped shirt, dark hair that was perfectly styled into all different directions, and neon-pink sneakers with black skulls painted on the sides.

“Yeah. It’s an honor to meet you.” The kid held his hand out for me to take, offering me a firm shake. I noticed each hand was tattooed with sugar skulls, one red – one blue, and he had some script that I couldn’t make out along the inside of his fingers. Coupled with the various designs inked onto either side of his neck, I wondered what, if any, art he had hiding beneath his clothes.

“You’re British?” I noted. I liked that. The fans will like that.

“Not at all,” I assured, gesturing my hand for him to take a seat opposite me. “So tell me, Ryder…why do you think you’d make a good Back Door boy?”

“I can’t answer that. I guess that’s up to you to decide. I mean, I’m not big or ripped like a lot of other guys, but I’m confident, adventurous, and I give everything one hundred and ten percent. I also love what I do, but right now, I think my only purpose is to line the director’s pockets. I kinda feel like I should be getting something too.”

“Ah yes, you already work in the industry,” I noted, scanning his application sheet. “How did that come about?”

“I kind of just fell into it. I’ll be honest, I needed the money. A friend of mine had experience in the industry and talked me into it.”

“And is it still about the money?”

“No. Definitely not. I’d be lying if I said that wasn’t a part of it, but really, I just enjoy it. I’m not ashamed of myself sexually and I feel proud that I get to embrace that on screen.”

I turned slightly, offering Xander a knowing nod. He raised his eyebrow, seemingly agreeing with the liking I’d taken to this kid. Xander’s opinion was important, as he was the one who would be doing a full audition scene with him. The kid didn’t know that yet of course. Spontaneously throwing them in at the deep end was a sure-fire way to tell if they were cut out for this business.

“So what made you come here today, kid?”

“Didn’t know if I’d ever get the chance to come back to LA, so I thought ‘why the hell not?’”

“You’re honest,” I said, offering a lopsided smile. “I like that.”

The kid shrugged. “That’s all you’ll ever get from me.”

“Okay,” I began, liking him more by the second. “Let’s get to the important stuff.”

He eyed me up curiously, shifting a little nervously in his seat.

“I guess my favorite is top, but I class myself as verse.”

“Anything you’re not willing to do? We don’t expect anyone here to do anything they’re not completely comfortable with.”

“What I’m asking is, are you up for using toys, eating ass, group fucks, DP?”

He smiled confidently, lifting his leg and resting his ankle on his knee.

“It says here your screen name is Kyle Kingston,” I said, referring back to the paper on my lap.

“How would you feel about losing the ‘ston’? I think Kyle King has more of a ring to it.”

“Okay, kid, how’d you feel about auditioning with Xander here?”

He looked nervous for only a second before securing his cocky and confident attitude back in place. “Okay. Let’s do it.”