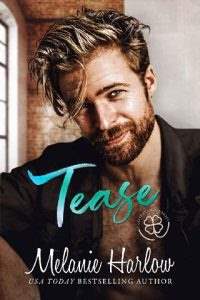 It was a bad day even before I picked up the scissors.

Not that I realized it. In fact, I was feeling pretty good that morning.

Sure, I’d just turned twenty-eight and was back home living with my parents, but that was only temporary. Tonight at my ten-year high school reunion, when people asked what I was doing with my life, I had a response all ready.

Me? Oh, I’m an entrepreneur, I’d say. I started a vegetarian catering company and food blog called The Veggie Vixen. I made some of the appetizers tonight. Have you tried the zucchini fritters?

I wasn’t in the top echelon of lifestyle social media influencers or anything, and I still had a part-time job as a sous chef, but my follower count was growing steadily, and last night The Veggie Vixen had catered its first large-scale event: a wedding at Cloverleigh Farms.

My older sister Millie was the event planner at Cloverleigh, and even though the bride had been a bit difficult to work with during the planning—demanding a huge, high-end reception with all the frills on a bargain budget and asking why we couldn’t “move a staircase” so she could make her entrance with the light hitting her a certain way—Millie and I had managed to put together a beautiful event for her, despite torrential summer rains that necessitated a last-minute switch to an indoor ceremony and cocktail hour. The bride and all her guests had raved about the food, flowers, and service all night.

So when I glanced at my phone and saw the notification from Dearly Beloved (the hottest wedding planning app out there) that I finally had my first review, I grabbed my glasses from my nightstand and eagerly tapped through to The Veggie Vixen’s profile to see it.

Reviewed by He Put A Big A** Ring On It

I am not a vegetarian but I thought it would be cheaper to not serve meat at my wedding. I WAS WRONG. Everything was crazy expensive and tasted terrible. The cheese toasts were soggy and even the meatballs did not have meat. I did not want ugly gross boring vegetables at my wedding but that was exactly what I got. If I could, I would give no stars. Just ew. DO NOT RECOMMEND. I want a refund.

I read it again and again, my entire body trembling with rage. Then I called Millie.

“Hello?” she said, her voice low and croaky, as if she’d been asleep.

“I did not serve anything soggy!” I shouted.

“What are you talking about? What time is it?”

“It’s eight-thirty. The bride from last night left a shitty review on my Dearly Beloved page!”

“She did?” Millie sounded more alert.

I grabbed a fistful of my hair and yanked on it, wondering if it was possible to get a bad review taken down. You couldn’t just tell lies in a review, right? Wasn’t that like libel or something?

“Oh, Jesus,” Millie said. “This is bonkers. She told me when she left how happy she was with everything.” My sister started to laugh. “‘Even the meatballs did not have meat?’ They were vegetarian! What did she expect?”

“It’s not funny, Mills.” Throwing the covers aside, I got out of bed and went over to my dresser, where I began to rummage around in my makeup bag, looking for scissors. I needed scissors.

“You know what?” Millie said. “I have a notification that Cloverleigh Farms has a new Dearly Beloved review too.” Then she groaned. “Looks like she was busy this morning. Why is she online posting bullshit reviews? Shouldn’t she be packing for her honeymoon or something?”

“What does yours say?”

“It says, ‘The peonies were wilted, the cheese toasts were soggy, the staff was rude, and the vodka was watered down. Everything was cheap cheap cheap even though I paid top dollar. I don’t know how this place has so many great reviews, they ruined my wedding. My ceremony wasn’t even in the place they’d promised me it would be. I want a refund.’ That last sentence is in all caps, by the way.”

My temper flared again, along with my nostrils. “Those. Were not. Cheese toasts!”

“But people on this app don’t know that, Millie. They just see a one-star review and assume I serve bad food!”

“Who’s really going to listen to a woman who refers to herself as ‘He Put a Big Ass Ring On It?’ Right there, it’s obvious her taste is questionable.”

“Easy for you to say.” I gave up on my makeup bag and stormed across the hall into the bathroom, where I began opening drawers and foraging through them. “Cloverleigh Farms has been around forever, and its reputation is established. It has a bajillion great reviews on Dearly Beloved already, but The Veggie Vixen is brand new—and now my only review says yucky and just ew!”