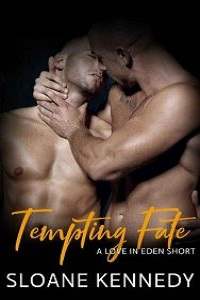 "Come on, Jackson, get a move on!" I shouted the second I walked into the room. Not surprisingly, I was rewarded with a volley of swear words coming from the direction of the bathroom. Well, they weren't actually real swear words. I supposed that was what happened when you had a kid.

I'd only known Jackson a few years, but the few times I'd heard him let loose on some guy because he'd been too rough with a horse or cow, I'd been stunned by the older ranch hand's show of temper. There had been no holding back the swear words in those particular cases. Hell, there'd even been a time or two when he’d let his fists fly. We might've worked on a cattle ranch where the animals' fates were undeniable, but unlike a lot of the men in our business, Jackson believed every living thing, whether it had hooves, paws, wings or scales, deserved respect and kindness. It was what had first drawn me to the man when I’d started at Broken Tree Ranch, especially since I'd grown up believing men had to be men and that meant using one's fists instead of their words to get their point across.

I heard the shower come on and shook my head. Jackson Doyle was a gentle soul when it came to delivering a calf or patching up one of the ranch's horses, but he sucked at being on time for anything. In that sense, he was as bad as all the women I'd ever dated put together.

"Dated… right Travis," I murmured to myself. Dated was a generous term for the kinds of relationships I'd been having with women pretty much from the moment I'd figured out how fond of them my dick was.

I strode across the small room which consisted of a bed, loveseat, and a few small kitchen appliances and practically stomped into the bathroom.

"You've got two minutes," I declared as I ripped the shower curtain back. "I finally got Brandy to agree to meet me—" I began to say, but my words got stuck in my throat as my eyes fell on Jackson. He was in the midst of washing his semi-hard dick and something about the sight of his hand on his own junk had me feeling like cotton had been shoved into my mouth and the frogs I’d been so fond of catching as a kid were jumping around in my belly.

"Jesus, Travis," Jackson snapped as he jerked back in surprise. I told myself to look up, but my eyes were glued to his wet, soapy cock. It was only when he jerked the shower curtain closed that whatever spell had fallen over me broke. I felt hot and cold all over as Jackson yelled, "I'll be out in five!"

I might have grumbled some kind of response, but I wasn't sure as I turned and practically fled the bathroom. My skin went from hot and cold to all hot, and I ended up reaching to see if my forehead was sweating because it sure as hell felt like I was feverish.

What the hell is wrong with me?

I found myself circling Jackson’s living space as I tried to catch my breath. The image of water sliding over his naked body refused to leave my brain, so I forced myself to focus on the sparse room instead. I'd been in the place hundreds of times, since it was usually me who was making sure Jackson was up every morning so that he wouldn’t be late for the day’s assignments at breakfast. Our boss, Mac, ran a tight ship, or in our case, a tight ranch. But we were well compensated for the long, hard hours we put in. Our pay was good, but unlike most of the ranches in the area, the senior hands at Broken Tree had the added perk of having their own living space. Jackson and I, along with four other hands, shared a small house on the ranch’s property. The newer ranch hands were consigned to living in a bunkhouse where they didn't have as much privacy.

While my room tended to have a more cluttered look, Jackson's was neat and tidy and the only decorations were pictures of his ex-wife and kid. Those were by his bed. I found myself heading in that direction. I wasn't sure why I was so drawn to the photographs. Maybe because it was still so hard to fathom that Jackson had once been a family man with a pretty young wife and a son. Jackson was such a quiet, distant man around most people that I struggled to envision him coming home from work each day and greeting a wife and child. But at the same time, I knew he was nothing like my own father, who'd had a passel of kids and had ignored them all in favor of a case of beer each night.