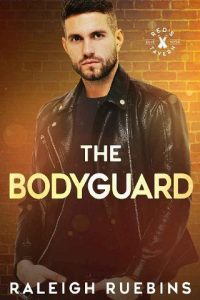 When I showed up at Red’s Tavern again, I wasn’t even sure what I wanted.

Did I just want to talk to a guy tonight? Kiss a guy? …Actually bring a man home and fuck him?

I could barely think about the last idea without my dick mashing up against the front of my pants, getting a little bit hard immediately, in the uncontrollable way it used to when I was a teenager.

I guess I wasn’t exactly good at being a “straight guy.”

Adrenaline surged through me each time I pulled up in the small parking lot and saw the nondescript brick building, even though so far, I’d gone home alone every time. My martial arts and security background should have prepared me for anything, but apparently the one thing that was bound to get my heart racing was the idea of being with another guy.

Another guy that might actually want me. Not one that would freak, bolt, and never speak to me again after I admitted my feelings.

It was crazy how your first heartbreak never really let go, even after years of trying to forget.

But that shit was in the past. Even if I hadn’t had the guts to actually seal the deal with any hot guys yet, I couldn’t stop showing up here.

I was addicted. And I didn’t want to stop.

I walked into the bar like I was on autopilot, swinging open the front door. The moment I went in, I began to relax. The place smelled like fresh, hoppy beer and citrusy margaritas. It was mostly empty, because it was still late afternoon on a Monday. Only one guy was sitting on one of the leather-topped stools at the long oak bar top, hunched over a drink. A couple of the booths had people sitting in them. The tavern could get rowdy and raucous at night, but right now, it was exactly the calm haven I wanted.

Somehow the big pride flag hanging behind the bar made me feel proud to be here, even though almost everybody thought I was straight.

I went and sat a few stools down from the guy at the end of the bar, still scanning the room. Being a security guard meant that even though I was off-duty right now, I could never really turn off my cautious, analytical thinking. I always knew where the exits were. I always took note of who was around me. And I never let anything surprise me.

Red was the owner of the tavern, and he was part of the reason I could feel so comfortable here even when my mind was reeling. Red was a cowboy, through and through. He usually kept to himself, but was one of the kindest men you’d ever meet, even after only knowing him for a little while. I’d only been frequenting the tavern in the last couple of weeks, but already I felt comfortable around Red.

Red’s Tavern wasn’t strictly a gay bar, anyway. But it certainly was the gayest one around here for miles. Small-town Kansas had never exactly been full of them. My brother Brody had dragged me here a few times, but even now after he’d moved away with his boyfriend, I kept on coming back.

One of the younger bartenders, Sam, walked behind the bar, his eyes glued to the other guy who was sitting and nursing a drink at the end.

I glanced over to the end of the bar again, letting my eyes settle on the stranger. All I could see was his hair, since he was hunched over his drink and his phone. His locks of wavy hair curled at the ends, dark brown and perfectly mussed, falling to just below his ears. He was in a collared white shirt that looked buttery-soft and probably very expensive, the sleeves cuffed halfway up his forearms to reveal delicate wrists.

A shirt like that probably cost more than I made in a paycheck.

My cock ached a little. I shifted on my seat, trying to look away. I needed a game plan. Why did all of my flirting skills instantly go out the window when I saw a guy I wanted?

I pulled in a long, slow breath and took a sip of my cold beer.

Until recently, I never could have imagined that I’d end up here. Everything had been on track until Emily had opened my laptop that morning, six months ago, and everything had gone to shit.