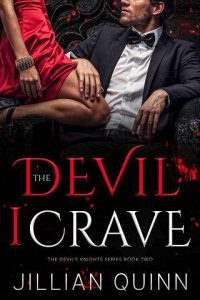 I made a deal with the Devil. And not with the handsome one standing beside me, watching his brother’s life dangle from a string. No, I prayed to the evil lurking within the halls, the monster that lived inside all of us. I’d never believed in a higher power, but I would have gladly signed a contract in blood.

Sold my soul to the Devil.

Anything to keep Marcello alive.

We’d become close over the past few weeks. The thought of losing another person sliced into my chest, gripping my heart so fiercely I begged for the pain to stop. I couldn’t handle another death, another loss. Not after what I’d been through in the last year.

I leaned against the wall in the ballroom, thick tears streaming down my cheeks. My legs shook so badly, Luca tried to hold me up, but I pushed him away. He’d done everything in his power to save me from his enemies. The Devil protected me from the demons at our doorstep. But when I was this upset, I craved silence and isolation. Marcello gave me those moments, let me steal as many as I needed to find comfort.

Marcello has to live.

After the medical response team lifted Marcello onto a stretcher, we followed them downstairs. The Devil’s Knights were already in the ballroom, helping a group of nurses and doctors assemble a mobile operating room. Within minutes, they transformed the elaborate room into a hospital ward. A plastic curtain hung from poles and stretched around the operating table, creating a clean environment. Well, clean enough, given the situation.

They moved Marcello to an operating table surrounded by beeping monitors and medical equipment. A nurse ran lines to his arms and placed monitors on his chest. Dressed in scrubs, my grandfather stood beside the table, his hand outstretched as a man handed him a scalpel, and then he went to work. The monitors buzzed so loudly my head pounded. My mind couldn’t process the events of the last hour.

A gunshot to the liver gave him about a thirty percent chance of survival, but Marcello was in good hands with Pops. Before his retirement, my grandfather was one of the top surgeons in the country. He’d even perfected a surgical method that won him awards and earned him lots of praise. But even with his skills, the mortality rate was high. So I prayed to the Devil again, begged him to let Marcello live.

I can’t lose him too.

Leaning forward, I cupped my knees with my hands and blew out a deep breath. In and out, I tried to steady my nerves. My heart raced so fast I thought it would break right through my chest.

Luca cupped my shoulder and whispered, “Calm down.”

“That’s the last thing you say to someone when they have a panic attack,” I shot back.

He tried to hug me, and I knocked his hand away. Luca had never been there for me when I needed him. He was usually the reason for my pain and suffering.

“Drea,” he groaned with a pissed-off expression scrolling across his tired face. “What the fuck is your problem? I’m just trying to help.”

“I don’t want or need your help, Luca.” I closed my eyes and breathed through my nose. Sweat slid down my forehead, dripping onto my eyelids, forcing me to blink a few times to clear my vision. “I have to work through this on my own.”

“If I were Marcello, you’d let me touch you,” he fired back.

I would have flung myself into Marcello’s arms and allowed him to stroke his fingers through my hair. When I was with Marcello, I truly felt at peace. We had a special connection I’d only felt with my twin. Sure, I had an attachment to Luca, but we formed our bond out of hate, not love. Our mutual and shared traumas tied us together.

My emotions were so out of whack I needed someone to blame, someone to hate. Luca was the perfect scapegoat. He’d caused the worst moments in my life, but there were a few times when he’d shown me so much pleasure and joy. I wasn’t sure how I felt about either of the Salvatore brothers. Torn between two Devils, a piece of my heart belonged to each of them.

Luca bent down, his mouth inches from my ear, the heat from his breath warming my skin. “Do you have feelings for Marcello?”

I glanced up at him, tears clouding my vision, and wiped them away with the back of my hand. “Marcello might not live, and you’re worried about my feelings for him? Give me a break, Luca.”

He crossed his suit-clad arms over his chest and snarled at me. “I almost lost you today. My enemies won’t stop until they pry you from my dead hands. We’re at war, Drea, which means we need to be united.”