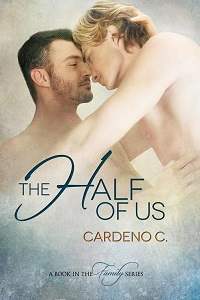 “THERE’S NOTHING anyone could have done.”

Jason Garcia dipped his chin in acknowledgment of the comment, but didn’t slow his pace or look at the anesthesiologist walking alongside him.

“The patient’s thoracic aorta was dissected. His coronary artery was lacerated. And he had several pulmonary contusions. Nobody could have survived that. The only mystery is how he stayed alive long enough to make it onto the table.”

Hearing Dr. Mason recite injuries the patient sustained when his Prius collided with a Range Rover going eighty miles an hour on roads slick with early September rain was nothing short of annoying. Jason wanted to point out that as the cardiothoracic surgeon on the case, he had in fact been in the operating room, so he didn’t need the instructional on the injuries. But he didn’t want to say or do anything to extend the conversation, so instead he grunted.

“I know how rough it is to lose one.” Dr. Mason put his hand on Jason’s shoulder in what was probably supposed to be a comforting gesture but wasn’t. “I’m off right now too. Do you want to get a drink and talk about it?”

Surprised by the question, Jason turned his head to look at Dr. Mason. What on earth did he think they could talk about? The patient was dead. Jason hadn’t been able to save him. No amount of conversation was going to change that.

“I have plans.” Jason took the final step toward the physicians’ locker room, grasped the doorknob, and said, “Thanks for the offer,” as he stepped inside.

Jason flicked his gaze to the clock above the lockers and saw it was after midnight. Late, but still plenty of time to shower, change, drive to a nearby bar, and pick up somebody he could use to fuck away the memory of the day. He had been doing that more often than not lately. When he thought about how differently his life had turned out from what he’d worked and hoped for, he inevitably ended up in more bars looking for more liquor and more sex in the hope of forgetting that realization. It was a vicious cycle, but at least he was getting laid.

“Yes, at this hour,” he said without elaborating further. He opened his locker, quickly shrugged off his clothes, and then stuffed them into the front pocket of his bag. “Have a good night.” He hurried to the shower, waving to Dr. Mason over his shoulder.

After making quick work of scrubbing down his body and washing his hair, Jason snagged one of the towels from the shelf and dried off. At thirty-six, he was still in decent shape, his arms defined and his chest and belly tight enough to look good under clothes. Silver now streaked his black hair at the temples, and small lines had formed next to his brown eyes, but the places he went were dark enough that nobody noticed. Though he couldn’t pass for being in his twenties and he didn’t get swarmed at the bars, Jason generally had no trouble finding what he wanted—a warm body to distract him for an hour, maybe two, when the only thing waiting for him was an empty house and the promise of another workday.

He got into his car, drove onto the 15, and headed toward his favorite places to troll—the bars close to the Strip. Guys in town for conferences invariably followed the “what happens in Vegas, stays in Vegas” motto and went out with the purpose of getting laid. Names, if they gave them, were first names only and more likely than not fake. Phone numbers weren’t discussed. And hotel rooms were conveniently located for a quick in and a seamless out.

At ten minutes, the drive from the hospital to the bar wasn’t long enough for Jason to clear his mind, let alone get rid of the rock-sized ache in the pit of his stomach that came every time he lost a patient, but he figured a couple of drinks and a blow job would do the trick. He climbed out of his black Mercedes E-Class convertible, straightened his oxford and starched jeans, and walked inside.

Dim lights, musky smell, men crowded around a bar chatting or calling for drinks, and two tables in the corner occupied by women celebrating a bachelorette party—a typical Friday night at the Phoenix. Jason hadn’t yet reached the bar to order his usual rum and Coke when a laugh distracted him. It wasn’t particularly loud, but the joy in it cut through the noise in the room and caught his attention.

Slowly, Jason turned in a circle as he narrowed his eyes and looked around, trying to find the source of the warm sound. He had almost made it back to his starting position when he heard it again, coming from the seating area tucked between the bar and the tiny stage. A group of men were squished together on the leather sofa, the table in front of them lined with empty glasses. One of them kept trying to get up, only to have his friends tug him back down.