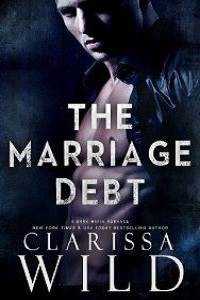 Looking at myself in the mirror, I adjust my tight suit until it looks perfect. “This one.”

“Prepare it for the wedding. I want it spotless and perfect.”

“Of course, sir,” he replies. “Only perfection for the De Vos family.”

Because our family doesn’t take anything less.

Even though I’m going to be marrying something less in a week from now.

I sigh to myself and go back into the changing booth. My phone buzzes, so I pick it up. “This better be important.”

“The editorial is going through,” one of my closest guards, Max, tells me. “It’ll be in the newspaper in a few days as well as on social media.”

“Good. Plaster Jasmine’s name everywhere. Online too. Make sure they put up a photo too.”

“And call me if you get a lead,” I say, and I click off the conversation and focus on taking off this suit.

Even though I’m marrying a girl I don’t even want, there’s still a fucking smirk on my face.

Because one thing excites me more than making sure everything is going according to plan for this goddamn wedding.

Throwing out the bait … and hoping the sister, Jill Baas, will bite.

My little runaway bride is caught between her own choices and her obligation to her family.

No fucking way will she be able to resist.

The first time I met the guy I was never supposed to marry, I didn’t know what kind of a monster he truly was. What kind of devious plans he’d set in motion to make me completely and utterly his.

And now he’ll make me pay the price for running away from him.

I swallow as I stare into the eyes of Luca De Vos.

Heir to one of the most powerful mafia families in the Netherlands … and my worst nightmare come alive.

A long time ago, our family considered his family friends. But our history is tainted by a bloody debt. One he’s now trying to make my sister pay for … by forcing her to marry him.

“Take me instead,” I say, every word reverberating in my ears like I’ve been sentenced to death.

It’s his filthiest dream come true that I’m here right now in this church, pleading with him to make me his wife instead of her. I hate him. But I love my sister more.

As our gazes connect, the darkness behind those hooded eyes of his has only become more menacing since the last time I saw him three years ago. When I ran like hell to get away from him.

His dark, flowy hair still highlights his square jawline, and the slick suit he’s wearing barely fits his now muscular shoulders. There’s still a small feather earring in his ear, and he’s now added thick skull rings on his fingers. But what draws my attention the most is the vicious, full-lipped smile on his face, growing deeper, and deeper, and deeper.

Until it almost stops my heart.

That same smile once made me run.

After three years, I can still hear his voice in my head when he yelled, “Jill! I will find you! You hear me? I’ll fucking search the end of the world if I have to!”

It turns out, he didn’t have to search far for me.

All he had to do was hit me where it hurts the most.

But I won’t let my sister take the fall for me.

I don’t move from my spot, staring him down to show I mean what I say.

I’m not backing down. Not this time.

His devilish smile brings chills to my spine.

Jasmine’s eyes tear up, and she says, “Jill? Don’t do this, please.”

As Luca takes a step in my direction, she blocks his path with her arms held wide. “No. We were going to marry,” Jasmine says. “Jill, go away.”

He shoves her away into the bridesmaids. His eyes are focused solely on me like a gun finally finding its target.

I gulp down the nerves and face him with my head held high.

He’s much taller than I remember him being.

Or maybe he’s finally grown into the man he was meant to be.

And every bit as dangerous as he ever was, if not more.

“What is the meaning of this?” Lex De Vos suddenly jumps up from his seat and marches over to me before Luca can reach me, and he grabs my arm. “After all this time, now you come back?” His strong grip hurts. “You ran from us like a goddamn coward.”

I ran from Lex De Vos and his son because of what they were planning to do to me. For how they were going to make our family pay for what I did to theirs.

Luca’s mother is right behind him, throwing me glares over his shoulder. “We should kill her right now for her insolence.”