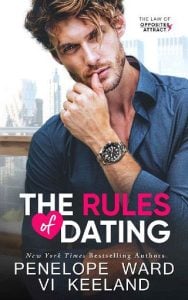 It all started when I hosted a little party for a bunch of new friends.

Though “friends” might not be the right word since the invitees were all the women I’d found out my boyfriend was talking to behind my back. When the guest of honor walked in—aka my now ex—things took a turn…

Unfortunately, a stranger witnessed the whole blowout. I was in a mood that night and ended up giving this gorgeous guy an attitude, too. As if my night could get any worse, before he stormed off, he informed me he was actually my landlord.

Colby Lennon, along with three of his friends, owned the building where my tattoo shop was located. He and I were total opposites. He wore a tie, oozed confidence that came with years of women falling at his feet, and wasn’t afraid to say what he wanted, which lately—was me.

I hated that I found myself attracted to him. Especially since I was supposed to be on a self-imposed dating hiatus. Yet the two of us couldn’t seem to stay away from each other. We started hanging out, as friends. I even went as far as making rules for what he’d dubbed our “undates.”

But eventually, our explosive attraction became too much to bear, and we broke our resolve. I let my guard down and started to really fall for Colby.

Nothing could have prepared me for the ride he took me on. And I certainly wasn't prepared for where I'd wind up when the ride was over.

All good things must come to an end, right?

Except our ending was one I didn't see coming.

I looked around Kaiden’s kitchen for a charger. He usually kept one on the counter, but it wasn’t there today. So I headed to the bathroom, where he was currently showering, to ask him where it was. On my way, I noticed his phone charging on the nightstand. It was fully charged, so I unplugged it and stuck mine on the charger instead. Then his buzzed, and a Tinder notification popped up.

Why would Kaiden be getting a notification from Tinder? Sure, we’d met on there a few months ago, and I had the app on my phone, too, but I’d stopped getting notifications right after I put my account into temporary deactivation. We were supposed to be exclusive.

Maybe someone he’d been talking to before we met had reached out? I wanted to ignore it and give him the benefit of the doubt in the worst way. But my dating history wouldn’t let me. I had been burned before…badly. So rather than be the trusting girlfriend, I listened to make sure the shower was still running and then typed in his code—6969. I’d laughed when I noticed him typing it in once. But maybe I should have seen it as a red flag, representative of the dude’s relationship maturity.

Inside the app, he had a shitload of messages, so I went to the one marked new and opened it.

Katrina: I can’t wait to meet you, too.

Three obnoxious emojis followed: kissy lips, a heart, and a cocktail glass. Scanning back, they’d been talking for a while, and the last message had been sent by Kaiden only an hour ago. My heart started to pound. I felt like marching into the shower and drowning the bastard. But instead, I kept swiping. A sick feeling came over me as I read through the endless stream of conversations he’d been having. In the last week alone, the jerk had messaged with twelve women. One would have been bad enough, but twelve? Then I noticed his profile picture. Something about it looked familiar. I zoomed in for a closer inspection and realized why. I’d taken it! The asshole had cropped me out.

My face was so hot, it felt like steam might start billowing out of my ears. And today of all days. It was Kaiden’s birthday, so I’d closed my shop early and rushed home to bake cupcakes before coming over.

First off, I didn’t bake. And I certainly didn’t close my shop early ever.

I’d also spent two weeks working on his gift—artwork for a custom tattoo he wanted to be surprised with. Do you know how stressful it is to design something for someone who gives you no idea what they want and doesn’t want to see it until after it’s permanently inked on their skin?

Grrrr. I wanted to scream.

But I didn’t. Instead, I took a deep breath, closed my eyes, and slowly counted to ten. When I was done, I felt no better. I definitely still wanted to rip Kaiden’s head off. But in that moment, it hit me that there was something other than yelling and screaming that would make me feel better. And that was revenge.

So I came up with a plan. First, I typed a message back to the last woman he’d been messaging with. Then I copied and pasted it to the eleven other unsuspecting women he was actively chatting up. When I was done, I plugged his phone back into the charger. But what if the ladies responded to my messages? That would inevitably cause a notification to pop up and tip him off about what was coming.