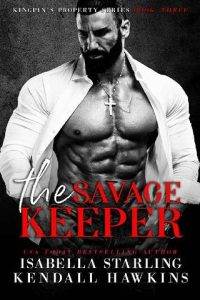 His ring on my finger is a cage I can’t escape. But maybe I don’t want to run anymore…

They warned me about Xavier Gunn.

My parents told me he was a monster, a twisted cartel leader who will stop at nothing to get his way.

I chose not to believe them.

Instead, I followed him to the depths of hell.

Now, I have a decision to make.

A decision that will change my life forever.

But perhaps it’s not my choice at all.

Because if I choose wrong, Xavier will decide for me.

And by now, I know he will stop at nothing to get what he wants most.

The Savage Keeper is the third and final book of the Kingpin's Property trilogy. It is not a standalone book.

I’m ripped out of my sleep by the sound of waves crashing against the shore.

My first instinct is to get up, but I quickly realize it’s not possible because I’m wired to a fuckload of machines. My shoulder aches like hell and I feel like shit. It takes a couple of minutes for my memories to come back. I relish the moment when I momentarily forgot about what happened. But as soon as it hits me, rage fills me to the brim, making me yell Saul’s name. No response comes.

With a groan, I rip the oxygen tube off as well as everything else that’s keeping me tethered to the bed. I don’t even notice the overwhelming pain, too distracted by my anger, which takes up all of my mental capacity.

Tallulah’s betrayal is the first thing on my mind. How she played me, took me for a goddamn fool. I need to know where she is, how long I’ve been fucking constrained to this bed, and how soon I can get my hands on my former ward to choke the life out of her slender, pale neck.

I grit my teeth when the pain hits me in overwhelming bursts. My shoulder wound is throbbing and I feel nauseous, but it will not distract me. Now that I’m finally awake, I have one goal in mind, and that’s putting Tallulah Gunn in her place once and for all.

I can’t believe I allowed this to happen. That I didn’t notice the warning signs. There was a glimpse of Tallulah’s true identity when Antonio died. I should have known then she was acting all along, playing the perfect role for my benefit. Instead, I fucking fell for her lies and killed an innocent man.

The desire to scream makes guttural groans escape my lips as I storm down the hallway, naked from the chest down. My hands are fisted, and the guards standing in front of my room are too scared to say a word as I race past them. I need to find Saul. I need to find out what happened and how long it’s been.

I storm into the room at the end of the hallway. Saul and Phoenix, one of my men, are sitting at my goddamn desk, like they fucking own the place.

“What the fuck are you doing?” I roar when I see them. They seem surprised by my appearance, both quickly standing up and leaving their seats to come stand closer to me. Saul places a hand on my uninjured shoulder.

“Padron,” he says respectfully. “I’m glad to see you’re up. But you shouldn’t be walking around. We can walk you back to your bed.”

“My bed?” I hiss. “I’ve been lying around for long enough. I need you to fill me in on what happened. Tell me everything right now. How long have I been in that hospital bed?”

Saul and Phoenix exchange an uncomfortable glance. My right-hand man doesn’t seem to find the words to explain what happened, but Phoenix speaks up, looking me in the eye. I fucking hate his pitying face.

“It’s been a while, don Xavier,” he says with regret.

“Don’t fucking patronize me,” I grunt, grabbing him by his shirt and snarling in his face. “How long, you fucker?”

“It’s been three weeks, padron,” Phoenix admits. He doesn’t recoil from me, which speaks in his favor. He’s not a fucking pussy, that’s for sure. “I’m sorry.”

I let go of him. Three weeks. Twenty-one days of my life that I’ll never get back, because Tallulah stole them from me.

“How could you let me fucking lie there for so long?” I demand.

“Padron, you were in a medically induced coma,” Saul says. “We didn’t even know if you were going to make it. The doctors only woke you up a few days ago, but you still didn’t regain your consciousness. We thought…”

“You thought what?” I narrow my eyes at him.

“You should really be in bed,” Saul pipes up again with his useless advice. “The doctors said-”