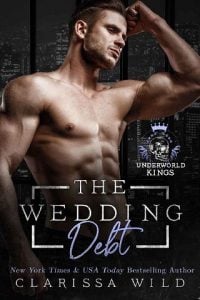 Once upon a time, there was a girl with a crown too heavy for her head and a prince who was ready to steal it all for himself.

“No, give that back!” I scream as Luca runs past me and snatches the crown right off my delicate head.

He laughs out loud and spins around on the grass a few feet away from me, dangling the crown between his index finger and thumb while wearing a disgusting smirk on his face. He blows aside a strand of his brown hair, his dark eyes taunting me. “C’mon then. I dare you to get it back.”

My eye twitches, and my hand curls into a fist. “Give. It. Back,” I say through gritted teeth.

When I approach him, he keeps backing up, making it impossible to retrieve.

“No,” he replies, grinning so broadly I want to take off these pretty new heels I got from Mom and jab them in his face.

Instead, I dig my heels in and sprint toward him, trying to catch him off guard. He twirls the crown around right as I catch up, giggling hard as he sidesteps to avoid me. “Missed,” he muses.

I growl in frustration. “Luca!”

“Jill!” He imitates my voice with a high-pitched tone, and the sound makes my blood boil.

“C’mon, Luca …” My sister, Jasmine, sighs as she follows us around the garden in her pink dress.

“What, Jasmine?” he scoffs.

“It’s not funny!” I jump to snatch the crown from his hand, but he keeps throwing it up and down, out of my reach, backtracking like he enjoys seeing me struggle.

So I stop and put my hands against my side. “Why do you do this? Huh?”

He raises a brow and shrugs. “Because you look stupid.”

My jaw drops, and a gasp escapes my mouth. “I do not!”

“Only queens and princesses wear crowns,” he retorts. “And you’re neither.”

I’m fuming so much it feels like steam might exit from my ears. “I am a queen!”

He waggles a finger. “Queens are only queens if they’re married to a king.” He plops the crown onto his own head. “Maybe I’ll be one now.”

Jasmine begins to giggle, but when I look at her, she slaps her hand in front of her mouth like she’s trying to hide it.

“C’mon then, Jill. You wanted to be a queen,” Luca jests, and he waves his hand and dips into a bow.

I frown. “What? You want me to be your queen?” I snort out loud.

He cocks his head. “A queen isn’t a queen if she isn’t married.”

I revolt at that thought.

Me marrying Luca? No way.

I turn away from him, sticking my nose up into the air. “I would rather marry a slug than you.”

“A slug?” He laughs himself silly to the point of losing the crown.

I continue to ignore him while Jasmine approaches me. “Let’s do something else.”

Luca slowly approaches us. He’s still holding the crown with a look full of mischief on his face. I don’t trust him, but maybe I’ll be able to steal it away again if he gets close enough.

I turn and look at him, holding out my hand.

But instead of handing me the crown, he hands me a slug.

I shriek out loud and drop the slug, scraping my hand along my dress to get rid of the slime it left. Luca is laughing so hard he can’t catch his breath.

“That isn’t funny!” I yell, stomping my feet.

“Yeah, it is,” he responds, still laughing while pointing at me. “Your face.”

Now I turn even redder, like a volcano ready to explode.

When she tries to snatch the crown from his hand, he quickly jumps back again, still taunting us. He just can’t get enough of teasing us, and I hate it.

He shrugs. “Who plays dress-up anyway?”

“What’s there to like? Dumb clothes,” he says. “Don’t make you any less ugly.”

I try to snatch the crown again when he’s distracted by Jasmine, but it isn’t working. He’s much bigger than I am, and it’s making me so angry.

“You won’t get it back,” he says as I jump around him.

“I think I’ll keep it.” He lowers it and puts it onto his own head again. “See? Looks much better on me than it could ever look on you.”

“Oh, please,” I respond, crossing my arms. “If you wanted to play with us, you could’ve just said so.”

“No way.” He wanders off to pick up a stick from the ground that he uses to whack the long strands of grass. “Annoying you is way more fun.”