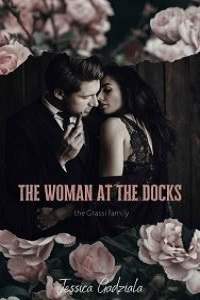 The first time I saw a man murdered, I was seven years old, sneaking out from the backseat of my father's car, where he'd told me to stay, to keep an eye on my little brother.

But at seven, curious, and resentful at having to babysit to a three-year-old who was still grieving the loss of our mother, I had given Matteo my comic book he wanted but I had always told him he couldn't play with, climbed out, and made my way through the long, abandoned parking lot.

The smell of saltwater teased my nostrils, mixed with a distinctly fishy smell thanks to the low tide.

The docks, that was what my father called this place. His business. I didn't understand what, exactly, he had to do at this place with the massive cranes and the endless shipping containers being moved off of ships and onto land. Or vise versa.

I did know that he and all his men were always in suits, always had twinkling cufflinks and shiny watches, which made me think it had to be important work.

But when I asked him what he did, all he responded with was I run the docks, Luca. That is all you need to know. For now.

And, at that age, I was tired of being told for now or when you're older.

I wanted to prove I was big enough to be a part of this secret world of his. Even if that meant I had to force my way in, so he could see that I was old enough.

As I crept along the line of containers that I'd seen my father disappear between after meeting up with one of his men, Leandro, a tall, wide man who my father claimed 'clearly enjoyed his food a little too much,' had a thick accent that was from the Old Country, and a giant golden ring on his right thumb.

My father had a lot of men, but Leandro was probably the one who was around the most, an almost constant fixture in our house after our mother's funeral.

"For moral support," my father told me when I'd asked why Leandro was there for the third day in a row, sleeping in the guest room.

I was pretty sure that was a lie, though, since there were also a lot of men outside our house, walking around, shining flashlights here and there when they thought they saw or heard something.

I didn't understand why, but I knew it was strange, knew that it had only ever happened once before.

A couple weeks before my mother died.

I remembered her coming into my room, climbing into bed with me after checking on Matteo, wrapping me up, telling me what a big, strong boy I was, how I was going to become an even bigger, stronger man. Someone just like your father, she had told me proudly, kissing me on the temple. When I'd asked her why she was in my bed instead of her own, she'd told me that she was scared. When I asked of what, she told me that there were a lot of scary things in the world, which was why it was important I grew up to be like my father.

I didn't understand, but it was nice to have her in my room, even if I would never admit that to my friends. Her hair always smelled like flowers. And her hands of onions because if she wasn't dressed up really nice and running errands, she was in the kitchen making big batches of food for us, for our friends, for our extended family.

I had been especially broken after her death because I had gotten so accustomed to having her there in my room at night, closer than we had been since Matteo came into the world, taking some of her time away from me.

But she was gone.

And like my father and uncles had told me at the funeral, I had to be a man now.

Which was what I was doing.

Doing what my father did.

I didn't know at the time what it would mean to be a man like my father.

But each step I took along that concrete was taking me closer and closer to the reality that was his life.

I had just broken into the space where the containers cleared from an alley and into a wider space when I heard my father's voice- calm and collected as it always was, never a man to lose his temper.

Louder than that, though, was the sound of begging, whimpering, sniffling.

Crying was something that seemed out of place to my young ears. Because I'd learned all through the hours after I'd been told that my mother was gone, through the days after, then the funeral, that it was good I was being so strong, that I kept my chin up, that I wasn't showing any weaknesses.