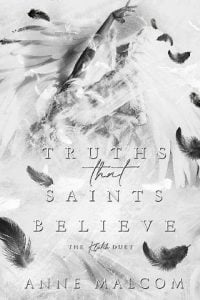 Jay leaned back and watched his security guard walk through the throngs on the dance floor, toward the woman he’d described.

He hated the ghost that haunted him in this moment. The déjà vu. He had spent far too much time ruminating over what he’d lost. What’d he’d thrown away. Even though he’d never had her. Not really. She’d loved an idea of him, not his true self. He’d shown her glimpses of who he truly was, the wickedness inside of him. And she’d loved those parts. Because she could love wicked things. Or at least, she’d thought she could. Jay was an intelligent man … he was smart enough to know that Stella would never be able to love the core of him.

He’d been reckless, selfish and dangerous even thinking that he could’ve made it happen. That he could have merged the cold, calculated, powerful and deadly life he’d created with the warmth and light Stella brought.

She would have hated him.

He would have hated himself for not letting her go. For tearing apart all of the dreams she’d had, for treading on all of the futures she may have had with another man.

Jay’s fist clenched. The mere thought of another man touching skin he’d marked, skin he owned, turned his blood hot. The need to hurt—to end—any man who thought he had the right to what was his was overwhelming.

The entire point of him letting her go was for her to find someone capable of giving her what she deserved, but Jay could not be sure if she found someone else that he wouldn’t kill the man. He sought control in every facet of his life, but he could not control himself when it came to Stella.

He could control himself even less in her absence.

He knew that people were talking. That his employees from both his legitimate and illegitimate businesses feared him even more than they had before.

Jay wasn’t sleeping. As soon as he left his offices downtown, he came here until closing. Then, when night held the deepest shadows, he went to do things that could only be done in the dark. Things that he’d hid from Stella. Things that would’ve eaten away at her love for him like erosion on rock.

The soft whirr of the elevator doors opening and the click of heels on the floor interrupted Jay’s thoughts. Well, not completely. He was always thinking of Stella. Her absence was a black hole in his mind. Left him distracted. Which was dangerous, especially with the stirrings in his territories. This was not the time to be distracted.

Which was why the knockout with the fake tits was sauntering into his office. He hadn’t touched another woman in months. The only woman he wanted to touch was across the fucking world and out of his reach.

“Mr. Helmick,” the woman in front of him purred.

And it was a purr. She was like a cat. Eyes sharp. Cunning. Knowing.

This woman was not ignorant to what he was. What this was. She knew the score. Had heard the rumors. She likely wore the dress that molded over her tits like a second skin precisely to try and lure in a big fish tonight. If not him precisely, then someone with a lofty bank account who was either deluded enough to think she liked him for his personality or smart enough to know that he was getting laid no matter her true feelings.

Those were the kind of women he had gravitated toward before Stella. The predictable, hungry and shallow ones. The ones after money and willing to do whatever and whoever it took to get there. Jay did not judge or blame those women; he appreciated them and enjoyed them. Because their motives were clear and simple, they were easy. They were willing to submit to his every whim, ready to mold themselves in to whatever shape they thought he’d like most.

“Take off your clothes,” he demanded, still sitting in the chair, still seeing Stella standing there, talking about her cat and forgetting people’s birthdays.

The woman did not hesitate. She smiled in a practiced way that made most men’s cocks twitch and shimmied out of her dress.

She wasn’t wearing anything underneath.

There was no fight in her. No battle. No anger. No outrage. Only hunger. And not for him. For what she could get from him.

Stella had obeyed him when he’d uttered this command at his home office. But she’d done it with fury. She’d done it despite all of her best instincts, and she’d done it because she’d had no choice. Like him, she was trapped in the connection between the two of them

The red string of fate.

“It will twist and tangle through the course of time, of life, circumstances. But it will never break. The red string will always keep them connected.”