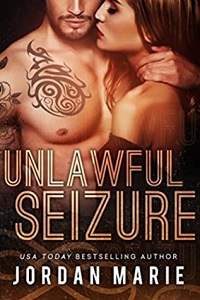 I wake up with a migraine and feeling sick to my stomach. That is sign number one. Sign number two is my horoscope warning me I shouldn’t leave the house today. Sign number three is when I go outside to discover my old, beat up, 1990 something model Toyota, sitting on a flat. I’m stressed out already, and it’s only 7 am. I’m all set to call in sick when my boss calls me with his usual song and dance. I’m sick today Tessa. I really need to take the day off. Clear all my appointments. Make up some excuse for me. What he really means, is he and his wife are flying to Tahoe for the weekend. I know because Claire, the other secretary, let that little tidbit slip.

When I remind him that Judge Ryson appointed him as counsel in a case that was on the docket this morning, he goes silent. When I inform him it is a parole hearing and can’t be rescheduled, that sick feeling only increases. When he asks me to get Stuart to cover for him, we begin a ten-minute conversation on why Stuart is hopeless and will end up losing the case and destroying a man’s chance for freedom.

I’m not usually so concerned, but his client today is Max Kincaid, and I’m more than slightly obsessed with this case. Max deserves someone who will actually try to get him free.

I shouldn’t be that concerned with this case. I should have kept my fat mouth shut because the next thing I know, Charles, my boss, has volunteered me to go before the parole board and present the case as his proxy. I try every way in the world to stress that I can’t do it. I point out that Mr. Kincaid was unlawfully put in jail, and he needs a real attorney looking out for him. I might as well have saved my breath. His response was that I know the case better than anyone and Mr. Kincaid would best be served with me, by his side.

“Tess you know the law inside and out. You can do this.” Click.

That’s the only response I get from my final plea for him to do what the freaking state pays him to do. I really should have quit this job ages ago. I haven’t because I can’t afford to. I would have loved to go on to law school, but I put myself through school to get my paralegal license. There’s no way I can work full time to pay back student loans, and go back to school.

I was stupid enough to think that I would get a job right out of school. Well, not completely stupid. I did get a job immediately—at McDonald’s and then later at Shoe Warehouse and Dollar Mart. I had three jobs and still could barely manage to pay rent on my apartment. It was also an apartment I barely visited, unless it was to collapse on the bed to nap before my next shift started.

I was drowning in debt from school loans and so tired I could barely hold my eyes open. When I walked into Charles Barger’s, and he offered me a paralegal position, it seemed like the answer to my dreams.

It turned out to be a nightmare.

It does keep a roof over my head though and the damn collection calls down. That’s what I remind myself of again today, as I put on my big girl panties and suck it up. It’s a parole hearing and on a case I do, in fact, know inside and out.

I get my tire changed and head to the office, grabbing the files and things I will need for the hearing, then head straight for the federal prison in Ormond. It takes a good hour to drive there, and the hearing is scheduled to start in forty minutes. That’s when yet another sign from the universe falls in my lap, in the form of a speeding ticket. Fuck my life!

I try to pay attention to my speedometer the rest of the trip, but it’s hard. My mind is swirling as I go over the facts I need to present to the panel. My boss wasn’t lying when he said that I knew this case better than anyone. The truth is I’ve been consumed with Max Kincaid’s case. I must have read his file a thousand times. I know it’s not healthy. I do. I just can’t seem to make myself stop. I stare at his picture, and something about those dark, inky, onyx eyes call to me. His features seem familiar, even though there’s no way that’s possible.

I’ve even memorized his information. Max Kincaid, age thirty-six, date of birth February 11, 1979. Dark black hair, black eyes, and three distinct scars. A small one above his right eyebrow, one on his side from an appendectomy he had as a teen, and one jagged scar on his chest he received in the line of duty as a soldier in the Middle East. Max is a hero, awarded the Purple Heart for heroism in battle when he saved his entire platoon from a mortar attack by driving straight into the line of fire and drawing it away from his men. He had more men offer to stand up for him during his murder trial than the judge would allow to testify. By all accounts, Max was the golden boy, the man that women loved, and men wanted to be. His downfall came from loving the wrong woman, marrying her, expecting a child with her and then brutally extracting revenge for their deaths.