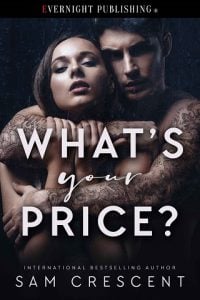 Laura Smith didn’t like being told what to do. After getting out of the foster care system at eighteen, she’d sworn to never allow herself to be in a vulnerable position and to certainly never show fear to any man. Gabe Moore wasn’t just any man, but one of the most feared men in the city. He commanded attention and power wherever he went. He owned everyone in it. Even people who had no idea of his presence were owned by him or connected to him in some way. Be it a workplace or restaurant. Sitting opposite him now, she stared right into his blue eyes.

He was a handsome man and could have any woman he wanted. She’d heard the rumors about him. How women would gladly strip naked just for a chance to be with him. Each piece of gossip she heard sounded even more absurd than the last.

“You’re not happy to be here?” he asked.

“It’s a beautiful restaurant. Your clothes look stunning. You don’t have to pay for a single thing.”

She glanced around the dimly lit restaurant. Other diners were present, but she saw the tension in each of their gazes. They were scared of this man. A mob boss, crime lord, she didn’t know how to describe him. He was a businessman and a crook.

“This restaurant has a bad reputation for firing the staff that don’t fit their mold. The dress is a size too small for my chest. I’m not stupid. Nothing in this life comes for free.” She covered her glass as one of his men went to fill it with wine. Drinking wasn’t on the cards for tonight.

This meeting shouldn’t be happening.

“I don’t like being told where to go or what to do. Your men gave me no choice.”

Gabe smiled but made no sound.

The biggest mistake in her life was not backing down from his gaze. Yesterday, he’d gone to the bar where she worked. It was after hours, so the place had been a mess. As per instructions, she stayed to help clean up said mess, only Gabe had been intent on punishing one of the bosses who owned the place. She’d never seen him before. The other employees had looked away, bowed at his command. Not her. He’d looked at her, and she’d stared right back.

To look away showed weakness. Once you showcased it, others exploited it. She knew all about that firsthand. She’d gone through a lot of shit and wasn’t proud of it, but that was why she had her own place and worked her ass off. If a guy so much as touched her, he would get a fist to the face.

Playing the role exhausted her, but life didn’t let her be herself. The moment she let her guard down, she was often fucked.

She’d gone home tonight after working at the diner for ten hours straight, intent on curling up and going to sleep, to find three men waiting for her.

Now she sat in one of the nicest restaurants in the city, opposite the most ruthless bastard she’d ever come across. Rather than shake or cower, she sat tall, staring into his eyes, waiting.

“I knew the dress was too small, but then I wanted to see how fucking sexy those tits were.”

She held her hands out. “As you can see, I’m not ashamed to fill out a dress.” The bodice was tight and it flared out across the hips. The gown that was designed for a princess, but she’d lived in the gutter. Some women would be ashamed of her body. In fact, she’d had plenty tell her she needed to cover up. Revealing any part of her fuller figure was disgusting. She’d embraced her curves, flaunted them. With the life she’d led, she’d gone many days and nights without food. Nearly starved. Earning her own money, she always ate heartily, and diets weren’t something she was going to do. She stayed active and lived her life by her own rules.

“I also know you like to reveal it a lot,” Gabe said, holding up his cell phone.

She glanced at the profile of her social media account. “I reveal what I like.” She didn’t do full-body shots, but what was on display was tasteful. Showing everything and yet nothing.

This time, she smiled. “Did you think I’d want help with that?”

“Why show your body if not to attract attention?”

She tapped her finger against the stem of her glass. “I don’t need to reveal my reasons for doing things, now, do I? Why did you bring me here?”

“You’ve got plenty of women at your beck and call. You don’t need me.”

“But you fascinate me, Laura.”

She raised a brow.

“You’re not surprised I know your name?” he asked.