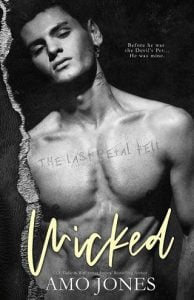 I remember the day he walked through our front door, bloodied and broken with the kind of torment that breeds, but never dies. Papa had one rule for him. Stay away from his daughter.

Years later, he crashes back into my life and tears down all of the walls I built up around myself. We’re both hiding secrets, but when the mafia world collides with the MC world, the shrapnel could destroy everyone around us.

Now the president of the Chicago chapter, not even I was prepared for his return. He's going to see that I’m no longer the precious princess of the Cosa Nostra, and I won’t play his games anymore.

This is a story about two souls destined to be together, but who are trapped in bodies that hate each other. It’s what happens when you both let love kill you.

To the kids who were told that they would never amount to anything because they liked breaking the rules.

I typed this with my middle finger.

She stared at me from across the room. It was the exact reason why I loved her. She was reckless with her need for me. She didn’t give a fuck who was watching. I felt it, she sure as fuck felt it, and I’m one thousand percent everyone in this goddamn room felt it.

My glass was half full. Whiskey. The kind that resembles love. Burns you right down to the core of your guts all while discreetly destroying other bodily organs in the process. Love was a distraction to destruction. Nothing more, and nothing less. My knee wouldn’t stop jiggling and my palms started to sweat. I simply wanted to fucking kill someone. The room was too loud. The music too fucking messy. Even the band playing looked like they were three seconds away from OD’ing on coke. This wasn’t what I expected at all from Ruby La Rosa. Do I even still know her? I don’t have to know her to still love her. I was fucked the second she sank her poisonous fangs right into my jugular.

“Look, if it’s any consolation, she looks happy, right?” Poppy leaned into me, resting her head on my shoulder. Lights pulsed rapidly to the music, and I watched as her hand slowly lowered down his arm, resting in the palm of his hand.

My thumb twitched. I rolled my heavy steel ring around and around like a dial that controlled my temper and it was about to conflagrate.

“Happy?” I turned to face Poppy, ignoring everyone else around the table, including the owner of the hand that’s resting on my upper thigh beside me. “You and I both know that is not her happy. That is her…” I paused, reclining against my chair and resting my arm on the one beside me. “That is revenge.”

Jade interrupted across the table. The centerpiece was excessive, so I could only see the outline of her face. “That is no choice.”

Whacking away the grabby hands from below, I stood up from my chair, finishing my whiskey.

“Where are you going?” Khaos whined from beside Royce. I ignored all of them. Moving to the other side of the room, I strolled past Victor. The closer she got, the more I needed to fucking obliterate something. Preferably her.

I brushed past her just as her back was about to rub against my chest, our eyes colliding. Seconds passed before I finally dragged them away from her and headed through the back of the room, where an exit sign flashed above the door. Instantly, the cold air wrapped its frosty fingers around my throat as I shoved the door open. The fucking suffocation of everyone in that room.

Of her in any room.

“What is it? Is something wrong?” Her voice was like a flame that continued to burn too close no matter how much I tried to blow it out.

I reached around her little body and forced the emergency door closed behind her.

“Wicked!” She spun around, pushing on the door again before turning back to me. “You did that on purpose.” A glare flashed across her fiery honey-colored eyes. “Why? Why do you fucking do this and make it harder on both of us?”

My hand slid down the wooden door, bringing our bodies closer. She sucked in a breath, her eyes falling to my lips. “You’re making this worse than it needs to be.”

Shaking my head, I brought the base of my finger to the side of her head, running it down her cheek and over her swollen lips. “Nah, but I’m about to.”

She parted her lips, and I slid my thumb between them, watching as they wrapped around the base. I retracted, lowering my lips down onto hers while grabbing her from her thighs and shoving her wedding dress up over her hips. Gripping on to the lace garter around her thigh, I tore it off and forced her against the door with my hips.