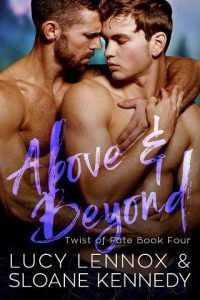 My brother was a dead man.

“Just stop by and check on him, Zach. As a favor to me. It'll take five minutes.”

Those were the words Jake had spoken to me shortly after my plane had landed in Missoula, Montana. The him in question was the son of my brother’s best friend, Xander, and Xander’s husband, Bennett. But the five minutes had quickly turned into ten, then fifteen.

A brief glance at my watch was proof that yet another fifteen minutes had gone by.

Which meant I'd been staring at the kid for half a fucking hour.

It took everything in me not to yell out of my truck’s window and demand that the kid go inside already.

Because maybe then I could finally take my eyes off of him.

I couldn't make sense of how much he’d grown up in just the past couple of years. When I'd first met him, he'd been only fifteen and he’d worn his innocence and sweetness on his sleeve, along with his heart. Back then, I'd wanted to tell him how dangerous a thing that was… how exposed it left him to people, and to men specifically, who’d take pleasure in using his naivety against him for their own gain.

No, I wasn't one of those types who intentionally sought to use and to hurt, but I was just as guilty of leaving shattered lives in my wake. Thankfully, I'd learned my lesson pretty young and hadn't since repeated the mistakes of the past. Any girl or guy I got involved with knew the score. Sex was just that—sex. And it rarely went beyond one encounter.

I'd also gotten better at knowing if a potential partner could handle my rules.

I knew without a shadow of a doubt that Lucky Reed was one of those people who most definitely wouldn't be able them.

When he'd been fifteen and clearly crushing on me, it hadn't been an issue. I never would've touched any minor and had gone out of my way to discourage sweet little Lucky's undeserved adoration. Problem was, the kid had been persistent and by the time he'd reached eighteen and was a college freshman, my brain had tried to convince me that the teenager was legal and that all bets were off. It had taken an emotionally charged encounter with him one Christmas for me to realize that my iron will to not touch him had taken on some pretty serious chinks.

I physically shook off the memory of the things I'd said to Lucky back then. It wasn't one of my proudest moments. In fact, that night had been a harsh reminder of why I'd pulled away from my friends and family so long ago.

After reuniting with my family in the wake of my brother Jake’s reappearance after having been missing for several years, I'd used my run-in with Lucky as an excuse to keep my distance once again. But the teenager had been only part of the reason I’d started finding excuses to stay away from the little town of Haven, Colorado.

My brother and parents had just assumed it was my most recent deployment that had kept me busy during the holidays and special events. They had no way of knowing that I'd intentionally turned down any opportunities to return stateside for visits and that I'd actually finished my most recent tour of duty six months early after damage to my knee had ended my career in the army.

At the mere thought of the incident that had changed everything for me, I felt my chest tighten and my breath shorten.

Not here. Not now.

I closed my eyes and tried to focus my thoughts on something more pleasant than the day I'd nearly lost my life… the day too many of my brothers-in-arms had lost their lives. I told my brain not to go where it usually did when episodes like this started to happen, but as usual, my rampant mind ignored the order and focused on the one person it wasn't supposed to.

You've got this, Zach.

The memory of Lucky's gentle encouragement helped ease some of the pressure in my chest. I let my mind drift back to that moment on the snow-covered hill near my brother’s cabin when a still fifteen-year-old Lucky had been teaching me to ski. The rest of the family had been gathered in Jake and Oz's—his now husband—cabin for Thanksgiving.

I'd agreed to the impromptu ski lesson after Lucky had learned that I'd never skied before but had always wanted to try it. It'd been just me and the teenager and the stillness of the trees as heavy flakes of snow had fallen around us. It had been one of the easiest, purest moments of my life. I'd forgotten about needing to keep the teen at arm's length and had simply enjoyed his company. There’d been nothing untoward about the encounter. It had just been two people having fun and living in the moment.