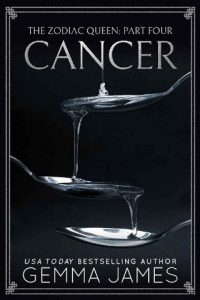 Detached, apart from one’s self, separated from existence. I never fully understood what that felt like until now. Activity whirs around me as I sit with the Zodiac Brotherhood at the large circular table. The gaudy chandelier sparkles above, giving off ambient lighting. Servants take away appetizer plates and replace them with the next gourmet course, forks scrape against fine china, and wine glasses rise to achingly beautiful lips.

Every man present at this farce of a welcome dinner is handsome; some regal, some understated, others roguishly sexy. It isn’t fair how sadism and corruption taints such beauty. And it’s unfair that not one of them seems to notice how I’m only here in the physical sense, my mind caught in a zephyr of fog as the edges blacken. The plate in front of me blurs. Voices grow faint. The last three months flicker through my consciousness, and I watch the memories like scenes from a movie.

My first experience on my knees for the chancellor. The game of chess and the way he made me beg for him after I lost. The heat in his eyes as he brought me to orgasm for the first time. The sadness in those gorgeous brown depths when we had to say goodbye.

I don’t want to think about what comes next, but the memories infiltrate before I can cast them into the muck of my mind. Mr. Bordeaux and his rules. My unexpected friendship with Loren. The degrading punishments.

My lashes flutter, scattering the recollections and bringing me back to the here and now. There’s no question that those months changed me, destroying the veil of innocence that protected the childish girl I used to be. Surviving such a soul-altering fate should prepare me for anything.

Because my time in the House of Gemini didn’t just shatter me—it shattered the foundation of my entire life, and I’m still trying to glue the pieces back together despite it being another month and another zodiac sign.

The men of the Brotherhood appear unchanged. Outwardly, I do as well, but my stomach is in knots, trust shifting as the truth I learned three days ago breaks through the barriers of deceit.

Liam sits in his usual chair, the first slice of the zodiac. The ram is rigid in his role as leader, and he wears the responsibility and obligation as well as the expensive coal suits he favors. There’s a familiar warmth in his eyes, offering comfort and reassurance, but my heart doesn’t respond with the normal dance his presence usually inspires.

The unfazed Heath Bordeaux takes the space next to the chancellor. If anyone on this side of the table remains unchanged in recent weeks, it’s the peddler of precious gemstones.

My gaze drifts to Landon Astor, the man I still have a hard time thinking of as my brother. Elise sits by his side, a diamond on her slender left hand. The stone isn’t as large as the one on my finger, but knowing Elise the way I do, my brother chose the perfect token of his love for her.

From the corner of my eye, I spy Dr. Vance Morgan’s expectant gaze on me, and I force my attention on the words coming from his thin lips.

“Is the lamb not to your liking, my queen?” He nods toward the plate of food sitting untouched in front of me. “The chef can bring you something else, if you like.”

“No, it’s fine.” I offer him an uneasy smile before taking a bite.

My taste buds aren’t the problem—the warning Landon gave me three days ago is. He believes Liam’s father was behind my parents’ plane crash, and if that isn’t bad enough, he thinks the Castles want me dead after the auction concludes.

The warning won’t stop looping in my head, bouncing off the walls of my mind with an ominous echo. I lift my chin and find Liam’s brown eyes on me once more. A bolt of awareness courses through me, and I have to remind myself that he’s a man I can no longer trust.

And even if I didn’t have my doubts about the chancellor, Landon ordered me to stay away from him anyway.

The rest of dinner passes in quiet chatter. Elise answers Liam’s questions about the wedding next month. When she mentions that I’m designing her gown, Liam’s gaze veers to me again. He’s been glancing my way every chance he gets, as if he senses the internal battle inside my heart.

I try to picture him conspiring to take everything from me, proclaiming his affection and protection one moment while planning my downfall the next. No matter the truth in my brother’s confession, or the certainty in my father’s words from beyond the grave—written by his own hand a week before he died—the core of my being doesn’t believe Liam is capable of conspiring to have me killed so my uncle can take the throne.