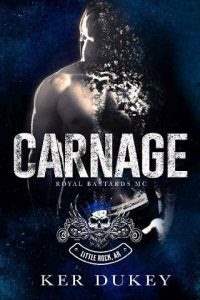 Screeching, loud and fucking annoying, comes from the back room of Hellmade Helmets. Animal, my prez and the owner of this place, would be pissed if he knew there was no one at the front desk. This place is becoming famous. Fast. The waitlist for a custom helmet is years. Animal opened two more shops in the last eighteen months, and it still hasn’t been enough to meet the demand.

The space is large and airy. Custom artwork interweaves into the floor and walls, matching the glass-cased helmets bordering the shop floor. A vintage Harley Davidson is suspended from the ceiling. The soft hum of classic rock croons from unseen speakers. Even though it’s a biker shop, I feel out of place. The place screams class and cash. I’m not hurting for money, but I don’t live that life.

“I’m eighteen now, Jameson.” A high-pitched squeal ricochets off the walls as a small brunette comes through to the shop. Brown doe eyes clash with mine, a sickly smile curling her lip as her gaze roams over my body. I’m a good-looking bastard, and it’s a curse. A man like me needs to go unnoticed, but that’s impossible when women don’t look past the pretty face to the dark empty beast beneath. Women are worse than men with that shit.

Leaning across the counter, her top gapes, giving me an eyeful of her flat chest. She twirls a strand of hair around her finger. “Hey. You want help with something?” Her eyes drop to my junk. “Anything?”

“Lily, you little brat, you’re fucking done,” a gravelly voice booms. A brute of a man appears through the same door, his shadow falling over her. His deadly scowl pings from her backside curved over the counter to me standing here.

Leveling him with an unaffected glare, I say, “I’m here to pick up a package, not a toothpick.”

The skinny brat gasps and stands up straight, her hand flying to what can barely be called a hip. “Are you going to let him insult me like that?”

“Lily, I swear to fucking Christ, between you and your sister, I’m going gray.” The mammoth man runs a hand through his hair, his heavy beard doing nothing to hide his grimace. “Idiot,” he bellows.

Another brother appears from across the shop who I recognise, he was a prospector last time I was in town. He looks at the girl and rolls his eyes. “Don’t ask me to babysit again.”

“You’ll do as you’re fucking told.”

“Get one of the prospects to do it.” Idiot is young, his patch fresh.

“You’re barely out of your prospect cut. Shut your fucking mouth and respect the chain of command before I beat you to death.”

“I’m not going with him. He smells weird.” The girl huffs.

“Fuck my fucking life.” The man exhales. “You asked for a chance to work here and couldn’t manage a week. You’ll do as you’re fucking told or I’ll call your grandma to come get your ass.”

“Can’t the pretty one take me?”

“Nope,” someone shouts from the back room. The pretty one, I assume.

I’m over the whole fucking scene and just want to get what I came for. “I’m here to pick up a package from Rage.”

The big guy drops his eyes to my cut, reading my road name and jerking his head. I’m not home a lot. It’s been years since I’ve stepped foot in the clubhouse here in Little Rock, but I’m well-known and respected by my brothers. “Go through the back. PB will get you straight.”

Rounding the counter, the skinny brat steps in my path. “I’ll have you know, cocktail wieners come on toothpicks,” she emphasizes, referring to my earlier comment. I scoff under my breath. I’m not sure if she’s implying my dick is small, but I admire her spunk all the same. Maybe once she’s grown out of her bratty stage, I’ll give her something to choke on.

“OUT!” The giant roars to her, his arm outstretched toward the door.

“Calm down, big bro. Your forehead vein is showing.”

Thank fuck I don’t have siblings.

I find who I assume to be PB taping up a box in the back, his long hair and pretty face giving him away. “Hey, man.” He jerks a chin.

“I’m here to pick up a package from Rage.”

He opens a drawer and shoves an envelope across a desk. “Here you go.”

Grabbing up the envelope, I slip it inside my cut and leave without another word.

Blood clings to the walls, ceiling, and carpets of the hotel room. The figure on the bed once resembled a man. He suffered like my instructions stated. I don’t know why my brothers wanted this man dead. I didn’t ask. I opened the envelope and did the job.