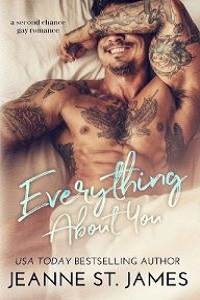 It was your smile.

The color of your eyes.

The way you looked at me when no one else was looking.

The way you held me.

The way you kissed me.

It was everything about you I loved.

The flattening of that smile.

The silence of your laughter.

The loss of your lips.

The way you left.

The way you destroyed it all.

The way you destroyed me.

It was everything about you I hated.

And that day you not only broke my heart.

You fucking crushed it.

I stabbed the up arrow button on the lobby elevator in my building. My breath quickly returning back to normal and the sweat starting to dry on my body. I looked forward to washing that sweat and grime from my skin once I got upstairs.

Maybe even doing more than that under the warm spray of the shower.

The numbers lit up one after the other as the elevator car traveled down from the sixth floor.

The buzz and click of the outer lobby door unlocking behind me had me glancing over my shoulder to see if I needed to hold the elevator for whoever just entered.

I pulled the sweaty T-shirt from over my shoulder where I had tossed it, and used it to wipe my face, because clearly I was seeing things. Sweat must have gotten into my eyes. Or maybe I was lightheaded because I hadn’t eaten anything since much earlier today.

Or… I was really seeing who I thought I was.

But that couldn’t be. I had to be imagining it. Imagining him.

Maybe I was having a stroke or some medical issue and needed to sit down. It was true that I hadn’t been running outside as much as I should be and it could be my blood sugar reacting to the intense cardio session.

Or I was simply delusional.

The man who had walked through the front entrance paused in the vestibule lined with the residents’ mailboxes. He appeared as if he had just rolled out of bed, even though he wore a suit. It was wrinkled like he’d slept on a park bench.

He couldn’t be homeless since he had the code to the front entrance and that was changed once a month. That meant he had to be a current resident, even though I had never spotted him in the building before.

However, not only did he look out of sorts, he was talking to himself. Just like the homeless man who often slept on a bench in Point State Park. The one who occasionally bathed in the fountain and also fished out the change thrown in by tourists and locals alike.

Funny, I never once had my wish come true after throwing a penny into a fountain, but maybe it worked for other people.

I couldn’t hear what the man was saying because of the second set of doors separating the vestibule from the lobby, but even with his head tipped down, I could clearly see his lips moving. He could be wearing earbuds and talking to someone on his cell phone.

Or he could be having a full-blown conversation with himself as he dug deep into his pants pocket. Most likely for his mailbox key.

Even after drying the sweat from around my eyes, he still looked so familiar.

The elevator dinged as it arrived on the main floor and the doors whooshed open. Mr. and Mrs. Callahan from the fourth floor stepped out with their little yappy, ankle-biter Pomeranian, Mr. Pibbles.

I side-stepped to give the older couple room to pass and also so that little fucker didn’t take a chunk out of my ankle.

Mrs. Callahan’s gaze swept over me and I knew exactly why.

I was wearing nothing but black silky shorts that, when sweaty, clung to my assets, along with running sneakers, ankle-high sports socks and a Penn State U baseball cap.

It also didn’t help that my skin wasn’t a perfect shade of pale and I sported a wide assortment of tattoos covering my torso and arms.

However, it wasn’t the first time they’d seen me after a run and, unfortunately for them, it wouldn’t be the last.

Mr. Callahan held the elevator door for me even though it looked like he was sucking on a lemon while doing so.

They were lovely people.

By lovely, I meant judgmental assholes.

Even so, we needed to coexist since we all lived in the same building. Instead of flipping him the bird, I gave him a nod and said, “I’m not going up yet, but thanks,” then took a quick glance over my shoulder again toward the vestibule.

The newest resident must’ve found his key since the metal door to one of the mailboxes now hung wide open while he rifled through a fistful of mail.

Shaking his head, he continued to talk to himself. The only time he glanced up was when the Callahans walked past him with Mr. Pibbles yapping in warning. Mr. Pibbles didn’t like strangers.