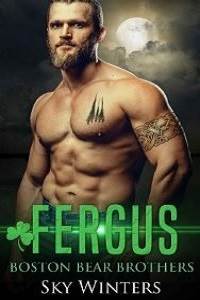 “I’ll have no son of mine involved in this shite,” Cathal McNally roared at his four sons, standing up to slam his fist down on the table before walking toward the small bar that sat to one side of the dining room. His limp was more pronounced today and he looked incredibly frail for a man barely in his sixties. An enemy would do well not to let that fool them, though. He might not be the man he used to be, but he was still plenty lethal.

“Alpha, I know you want us to keep our noses clean as much as possible, but we can’t just let this go on our turf,” Fergus replied.

The dissent was met with an angry glare. Their clan might have been decimated by their enemies in Ireland, leaving them as the only surviving members, but he was still their Alpha and did not like to be challenged, not even by his own son. Fergus sighed and tried a new tactic.

“Alpha, if we don’t do something about this, we’ll lose control. We can nary afford to have that happen. Let us at least just look into it and see what is happening. If it doesn’t affect us, we’ll leave it be.”

Cathal looked at him, studying him for a moment before looking to his brothers. None of them spoke. They were a force to be reckoned with out on the streets, but they weren’t so quick to cross their father. If not for him, they’d not even be here. He had managed to move four young boys out of Ireland before they met the same fate as their mother and fallen clan brothers. They did nothing without his go-ahead.

“And you three? Do you agree with your brother?” he asked them.

They nodded their heads up and down at his question, angering him further.

“Do ya have feckin’ mouths?” he barked at them.

“Aye, Alpha. We’ve spoken. We’re in agreement,” Olcan replied, speaking on behalf of them all.

“Fine. Do what you feel you must, but bring trouble on this house, and you’ll be regretting it.”

Fergus nodded and motioned for his brothers to follow him out, leaving their father to the nightly glass of Jameson he allowed himself. Thea, their old nanny who had remained on to help care for their father, smiled at them as they passed her in the hallway, waiting for their exit before joining their father in the living room. They each paused to kiss her on the cheek as they passed by. She smiled and left them to their business, having learned a long time ago that the less she knew, the better.

“Hannigan’s?” Fergus asked as they filed out the front door of their fathers’ home behind him, receiving a chorus of agreements.

They had been going to Hannigan’s Pub since before they were old enough to even get in. You didn’t get asked for ID when you were Irish Mafia, especially not if you belonged to one of the most feared families in Boston. They’d fled Dublin as boys, but they’d quickly become men on the tough streets of this city. No one with any good sense gave them any guff. They’d recruited and grown, but it was only the four of them and their father who made up the heart of The Boston Bears.

People scattered as they walked into the place twenty minutes later. They took their usual booth in a dark corner to one side of the club, ordering pints as they scanned the room for anyone who might be a problem. It was pretty quiet in there tonight. They relaxed, at least as relaxed as they ever got, and settled into their beers while they discussed the problem at hand.

“I talked to some of those drugged-out wankstains down at the docks today. Someone is fucking up the waters with shite meth,” Fergus told them.

Niall was the younger of the two middle children, but often mistaken for being older due to his size. He wasn’t quite as big as Fergus, but he was of a size that was impressive enough that men cleared out of his way when they saw him coming.

“Don’t know, but they’re gonna stop. Hit up your payrolls and find out. I’m not having that on our turf,” Fergus replied, pausing to finish off his pint and hold up the empty mug toward their server, swirling his finger about as a signal for refills. She was a regular server here and knew the rules. Don’t interrupt but be watchful for requests.

He noted the way Ronan, their youngest brother, eyed the server as she brought over a round of fresh beers and bent over to take their empty glasses. A good bit of her cleavage was visible down the front of the white button-up shirt she wore but failed to button up very far. She was a few years older than him, but when had that ever stopped a McNally Bear from claiming what he wanted.