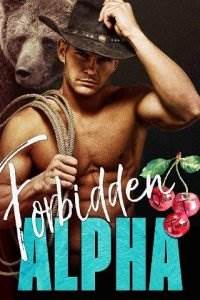 “I just don’t understand how you can defend him.”

“Because he’s my husband!” my mother snaps. “And he’s your father now.”

“Step-father,” I correct. Never in a million gazillion years would I ever consider Rhys to be my father. Ugh. I’m getting nauseous just from thinking about it.

“You got a say,” she says with a derisive laugh. “All you did was say how shitty he was.”

“Yeah and you should have listened because I was right,” I mumble under my breath.

She gives me a nasty look but doesn’t say anything.

It’s morning on Rhys’ ranch and we’re headed over to feed the goats. I hate it here. I need to get out.

It all started when we were living back in Columbus and Dad was wiping the snow off his car. He suddenly grabbed his heart and fell. I was in the front seat playing some stupid game on my phone when I saw it. I ran out, called 911, but it was too late. He was gone by the time the ambulance arrived at the hospital.

And that’s when my nightmare began. My mother met some random guy on a shifter dating website and less than a year later, she was dragging me and my brother to this small town in Montana to be free labor on the world’s biggest asshole’s farm.

I’ve been here for two years now and I want out. I want to start fresh with a new home, surrounded by sane people who love me. I want to be anywhere but here.

I hate Rhys, but I seem to be the only one who can see his true colors. My mother either defends him relentlessly or pretends she doesn’t hear the nasty things he says, and my younger brother is fully on board the Rhys train. Oliver worships him.

I’m not sure if it’s the grief he’s suppressing from missing our dad or the fact that they’re both tiger shifters, but Rhys has my impressionable sixteen-year-old brother under his spell. And I hate him for it.

A full-grown tiger walks by a few yards away and I glare at it. It’s Victor’s cat. I can tell by the wide-set eyes. Rhys always has all kinds of goons hanging around the ranch and they’re usually up to no good. I hate that my brother is becoming one of them. He used to be such a sweet boy but now under Rhys’ influence, he’s turning into a real piece of shit.

The tiger lowers its head and hisses at us as he passes.

“Kiss my ass,” I shout as I give him the finger. It just snarls and keeps walking.

“It wouldn’t kill you to be nicer to the men around here,” my mother says with a shake of her head. “You might like some of them if you open up.”

“I’d rather open my throat up,” I say as my stomach churns. “And these are not men. They’re boys. Mean, rude, immature boys and Oliver is turning into one of them thanks to your all-holy Rhys.”

My mother stops and spins on her heels, looking fed up. “I know you don’t like him, but I do. We’re living here and that’s that. You and him have to find a way to get along.”

With Rhys, that’s an impossibility. I don’t know what he really does for a living, but I don’t think it’s on the up and up. This goat farm is a front for something. Him and his crew of tiger shifters can do whatever illegal shit they want to, but I just want them to keep my family—especially Oliver—out of it.

“Are you going to try harder?” she asks with her nostrils flaring.

“Yes,” I lie as the familiar feeling of disgust at what my family has become settles into the pit of my stomach.

We continue walking to the barn and Oliver is already in there, feeding the goats. He’s a goofy looking kid with the same light blue eyes as me, but with a wild bird’s nest of hair on his head that is always sticking up in different directions. He used to always laugh when I said that his hair defied all the laws of gravity. That was back when we used to joke around.

“Did you hear?” he says with excitement in his voice as he drops the bucket in his hand. “We’re finally going to get that bear that attacked our crew!”

“Our crew,” I say as I cross my arms and narrow my eyes on him. “Your part of Rhys’ crew now?”

He puffs out his scrawny chest, acting like he’s a tough guy. “Dad says I’m on my way to being a member.”

Dad. I think I’m going to be sick.

“I think it’s great,” Mom says as she walks over with a smile and starts rubbing his back. “I love seeing you and your step-father getting along.”