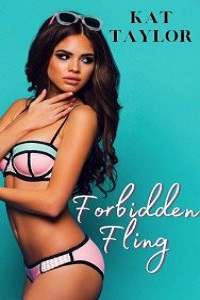 I clutch my boyfriend’s shoulders and dredge up a moan in response as he pounds away inside me. He isn’t bad at sex, exactly, but right now, he reeks of a combination of suntan lotion and alcohol, and he skipped right over the foreplay I need to get me there. Not that he seems to care at the moment, not while he’s chasing his own orgasm at the expense of mine.

Brad groans and starts thrusting faster, a clear indication that he’s about to finish. Damn it. I bite back a sigh and try for another moan. This is so ridiculous. This was supposed to be a romantic vacation to celebrate graduating, a chance to really get our relationship on solid ground before we try the long-distance thing.

Apparently, something was lost in translation because when we arrived at the beach this morning, it was to find Brad’s dad in the beach house…and three of his frat brothers. Sure, it was fun taking the boat out, but with Brad and his friends drinking like it’s one of their frat parties…

Romantic is not the word I would use to describe it.

He rolls off me and stumbles to the door, clutching the condom to his cock. “Be right back.” He ducks out into the hall, heading for the bathroom.

I shift on the bed, body practically thrumming with thwarted desire. It didn’t always use to be like this, but I’d chalked things going stale up to the pressure of senior year of college and trying to get our next steps squared away and figure out the rest of our lives. I was in the mood less and less, and when we did have sex, it was like…this.

Brad comes back to the bed and flops down next to me. “That was so good, baby.”

A soft snore greets me. I sit up and look at him. “Are you fucking kidding me?” He’s passed out cold. Jesus fuck. I curse and pause to roll him onto his stomach just in case and then climb out of bed. Damn Brad and his determination to have one last hurrah before he goes off to law school. I pull on one of his T-shirts from the bag he still hasn’t unpacked. I’m not going to sleep until I let off a little steam, and I’m not going to be able to do it here, with him snoring. I’m probably not going to be able to sleep at all.

The beach house is dark as I step into the hall, and I don’t bother to turn on any lights. All the doors are shut, which means everyone’s gone to bed. At least I won’t have to worry about Chad, Paeton, or Braedan being drunk and messy. Tonight, at least. No doubt all of them will roll out of bed at noon and start again.

I pad down the hall and into the living room. The house is really nice. So nice that I’m mildly irked Brad never brought me here before now. I knew his family was well off, but I didn’t realize his dad was loaded.

The beach house is like three thousand square feet, and even though it overlooks the actual beach and ocean, there’s an infinity pool and hot tub and a patio out of my wildest dreams with an outdoor kitchen. The living room itself is a big open-concept space that’s half couches, a coffee table, and giant TV, and a half kitchen with a massive island and bar. Giant windows overlook the patio. On the other side of the glass, the only light is the stars overhead, and the cool blue of the pool lit from within.

No one’s around, and it’s not like I’ll get this chance again on this trip. I move through the dark living room and step out onto the patio. The salty sea air makes me smile. I love the beach. When I move to Portland, I’ll live close enough to one to visit regularly, even though my new job will keep me plenty busy.

After one last glance at the house, I pull Brad’s shirt over my head and toss it onto a nearby lounge chair. A breeze kicks up immediately, licking at my exposed skin and puckering my nipples. I shiver.

This is reckless and a little wild, but I don’t care. I have spent four years playing it straight. No, that’s not right. It started long before then in high school, with my parents and their high demands and throwing myself through hoop after hoop to get into the college I wanted, with enough scholarships to actually afford it. And then, in college, while so many of my friends partied and took advantage of being adults for the first time, I could never quite join in. Not with all the responsibility weighing me down. The need to graduate college with a high GPA, to secure an internship, to figure out what the fuck I’m doing with the rest of my life…