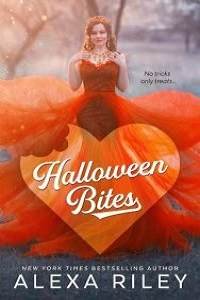 Raven Treat is an elementary school teacher with a secret crush on the uncle of a student. She's been lusting from afar, but little does she know he's been taking steps to make her his.

Jack Bates has been obsessed with Raven since the second he saw her. The Halloween school dance is his opening to make her his and make sure she never gets away.

Warning: Their story is fast, hot, and sugary sweet! Grab some candy corn and throw it in the trash... Then get some chocolate and snuggle up with this adorable read!

I look up from the stack of papers I’m grading to see Scott Grayson standing in front of my desk. His sandy blond hair is a mess, and a smudge of dirt is on his cheek. He clearly had a good time during the extra recess the class has earned today. His bright blue eyes sparkle with mischief, and I know what’s coming.

“Everything okay, Scott?” I glance over at the clock and see I still have a few minutes until the class has to come back to collect their things at the end of the day.

“My uncle Jack was asking about you again.”

My cheeks warm as a smile spreads across Scott’s face. I have to give it to the guy, he’s relentless. Maybe a little bit of a romantic at heart. I didn’t know third graders played matchmaker, but apparently this one does. Whenever Scott has a moment to talk to me, it’s always about his uncle Jack and just how wonderful he is.

I have to stop myself from asking how his uncle is, because I’m sure he’ll run and tell him anything I might say. Then again, who knows what he’s telling him. For all I know, he didn’t ask about me at all and Scott is making this up all on his own. I’m not sure I want to know what he’s telling his uncle about me.

“Did you have fun during the extra recess?” I try to change the subject because I don’t want to think about how my heart does a little flutter every time Scott brings up his uncle. Or how I feel a little weak in the knees when he sometimes shows up to pick him up from school. It makes me feel things I’ve never felt before. In all kinds of places. It’s how I always feel when his eyes are on me.

I don’t understand why he watches me, though. Jack is one of the hottest men I’ve ever seen in my life. He’s been the topic of conversation at more than one staff lunch here at Hartwood Elementary. I know more about him than I probably should at this point as all the female teachers here can’t seem to stop talking about him. Even a few male teachers, too.

I know that at the age of thirty, he’s a well-respected architect in the city. He was recently named one of the most eligible bachelors in Seattle, has his own charity that helps under-privileged kids go to college, and is more active in his nephew’s life than half the dads around here. All that perfection and it’s not even counting how handsome he is. So he’s definitely not looking at me.

I’m the new third grade teacher who’s a little overweight with no plans to change it. I’m not giving up sweets for anything, not even to get into a smaller size. I wear thick-framed glasses because my eyesight is terrible, and I’ve got uncontrollable curly hair that always gets in the way.

I’m so shy and inexperienced when it comes to men, I can barely say hi to him when he tries to talk to me. Maybe he’s looking at me and wondering why the school would hire a teacher who is so shy she can barely speak. Maybe that’s why he was asking about me. He’s probably worried Scott isn’t getting the schooling he should be. And for what some of the parents pay to send their children here, I can’t even be upset about that.

Scott does the cutest half eye-roll at my change of subject. “He asked if you were going to be at the Halloween party.”

“Of course I’ll be there. I wouldn’t want to miss seeing what you’re dressing up as.” I smile back at him, not taking the bait. This kid is good.

We both turn and look as students start to pile into the room.

“Everyone get your stuff. Don’t forget your agendas. Your spelling test is tomorrow,” I tell them over the noise as they move about the room, doing as I say.

“I’ll tell him you’ll be there,” Scott says excitedly. He seems happier about this than the actual Halloween party. “He’s right, too, Miss Treat. You do have pretty eyes.”

With that, Scott turns and runs towards his cubby to get his backpack. My face warms once again.