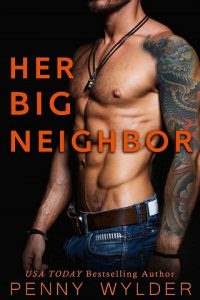 It’s a soft sound that wakes me, but it’s one I’ve been so accustomed to that my eyes open instinctually. It’s the quiet yet distinct sound of my neighbor’s front door shutting. Rolling over and looking out my window, I start my morning routine—looking at Edward Werlin. The hottie next door. We’ve lived next to each other for as long as I can remember, and for that same length of time I’ve had a crush on him. I don’t know him that well since we went to different schools, but I know enough to know that he’s a good guy. And it’s obvious to anyone with eyes that he’s fucking delicious.

Every morning at right around seven, Edward leaves for work. He’s some kind of business and finance guy. And I don’t pretend that that might have influenced my decision when I left for college to get a business degree. Edward always knew what he wanted, and whenever we talked at neighborhood cook-outs or family dinners, he sounded so passionate about it that it made me passionate about it too. Granted, I was pretty passionate about his face and staring at it while he talked too, but he didn’t have to know that.

Edward is standing on his porch, locking his door, and then he heads toward his car. He’s wearing a dark suit today, and the color emphasizes the lightness of his hair and his broad shoulders. Even when we were younger he was attractive, but it wasn’t till I came home a few weeks ago that I saw him again and holy shit, the couple of years that I was gone were good to Edward. He filled out and bulked up, and suddenly a face that was handsome became one with scorchingly hot angles and a jaw that wouldn’t be out of place on a runway.

I can’t deny that he’s been the star of my dreams ever since. He’d pop up occasionally over the years, but now he’s there every night, whispering secrets in my ear and making me absolutely ache with pleasure. Not that I’ll ever be able to act on that.

My mom hates men. She wouldn’t phrase it that way, she would say that she’s being pragmatic about the realities of life. But ever since my dad left when I was too young to even remember him, men have been scum that only think with their cocks and are looking for the newest, freshest pussy. So now that I’m living at home for the foreseeable future, I’m trapped with my fantasies. These few minutes when I can look down at my hot next door neighbor and imagine that the world is different.

Below me, Edward unlocks his car, and when he turns to get inside he looks up straight at my window and smiles. Fuck. He’s never done that before, and my stomach drops straight down to my toes. I swear that his eyes are so blue that I can actually see the color from here.

There’s no way to pretend that I wasn’t staring, and no way to hide that I’m in bed with my hair probably flying around my head after sleep. Super attractive. But I manage to smile back and give a small wave. What other option do I have? My cheeks go hot with a blush, but I don’t look away. I don’t think I could if I tried.

Edward’s smile deepens and he gives me a small nod before climbing into his car and starting the engine. It’s an understated car, not flashy or over the top, but it’s still a nice car. One that shows off taste and status as easily as the cut of his suit.

God, he’s so hot I can’t even breathe, and that smile and nod heats up my body in ways that a smile and nod should never do. Under the covers, I let my hand seek out my clit. It’s been a while since I’ve had sex. I haven’t been dating anyone for a few months and I clearly won’t be able date while I’m living here. But man, I need to get laid.

That’s evidenced by the fact that I’m wet from Edward smiling at me. What I want to happen is for him to come back into his driveway, get out and smile at me again. I want him to climb the ivy that covers the sides of my house and knock on my window. And I want to let him in.

A crash downstairs tells me that Mom is already up and going. But I push it away. I’m taking these few moments for myself before going downstairs and finding yet another pile of stuff that she’s decided to sort through alongside the 700 piles of stuff downstairs that she hasn’t finished sorting through. I can take these few minutes for me.