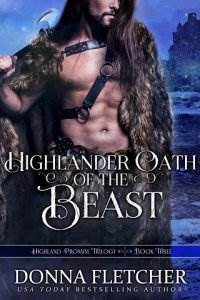 “How long does he stand out there each day waiting?” Arran asked.

Royden didn’t have to follow his brother’s glance to know who he asked about, but he did anyway. Their father stood on the top of the keep’s steps staring out beyond the village. Parlan was a sturdy built man for his four ten and six years. No gray touched his dark hair and the few lines and wrinkles age had graced him with hadn’t hampered his fine features. Yet he had chosen to pass the reins of the Clan MacKinnon to Royden, his eldest son. He had been reluctant to accept his da’s decree but had done so with pride and was now Chieftain of the Clan MacKinnon.

“A month now, I believe,” —Royden turned back to Arran— “ever since Brother Noble, informed your wife that he discovered our sister, Raven, was on her way home.”

“The leper could be wrong. It could be nothing more than useless gossip,” Arran said. “Brother Noble’s contagious illness doesn’t exactly win him friends nor does it make him a welcome guest anywhere but his home at Stitchill Monastery.”

“True enough, but one would think that living in such isolation, even when traveling, he hears and learns much. And you must admit all our efforts to find Raven have proven fruitless. Brother Noble’s news brought back the hope Da had lost of ever finding her.” He gave a quick nod at his da. “He doesn’t speak of it, but I know it weighs heavily on him that she, a young lass of ten and four years, saved his life. He should have been the one to keep her safe.”

“It was a task meant for the three of us,” Arran argued. “We all failed to keep the oath we swore and Raven suffered for it. And let’s not forget the suffering the brutal attack left on others.” Arran looked at the stump where his brother’s left hand had once been. “You lost your hand.”

Royden rubbed the leather-covered stump, needing no reminder. “We all lost, Arran, in one way or another. Fortunately, we’ve been reunited and you and I are happy, wed to women we love. We have even more to be grateful for with my wife due to give birth in the spring and your wife, following a few months later. Even Da has found love with Wren after being alone for too long. Life is good for all of us—except Raven.”

Arran looked away for a moment and Royden understood his brother fought to contain his anger. He did as well. It gnawed at him just as it did Arran and their da, that none of them had been able to protect Raven the day the clan had been attacked and now there was no way of knowing what she had gone through, what she might have suffered. And what she would be like when she returned home.

Arran drew in a deep breath as he turned his head to face his brother. “I fear for what the last five years on her own, hiding from our enemy, may have brought her.”

“I fear the same, but she will be well-loved and cared for here between the attention Oria and Wren will give her. And your wife will visit with her often.”

Arran nodded. “Purity and Raven had become fast friends all those years ago and had formed a strong bond. She will do all she can to make sure Raven does well.”

A strong gust of wind hit the two men and they turned their backs to it.

“Winter’s arrival is two weeks away, yet the biting cold in the air and overcast sky warns of possible snow. I fear the winter will be a cold one,” Royden said.

“I grew to hate the cold while with the mercenaries in the far north and beyond the North Sea,” Arran said, then smiled. “But I look forward to this winter, for I intend to hibernate in the keep with my wife and enjoy her warmth.”

“We should start that today with it being so bitter cold out.”

The two men turned and Arran’s smile grew when his wife, Purity, hurried to his side as he spread his cloak wide to welcome her in his arms. Her arms circled his waist and he tucked her snug against him and wrapped his cloak around them both.

Royden greeted his wife, Oria, in a similar manner. His one arm went around her waist while the other brought his hand to rest gently on her rounded stomach. She rested eagerly against him, but her worried expression had him asking, “What’s wrong? Aren’t you feeling well? Shall I get Wren?”

“I do well. It is your da who has me worried,” Oria said, looking to the keep steps where his da stood, his eyes scanning the distance while paying them no heed. “He waits day after day, and Wren says he hasn’t been sleeping.”