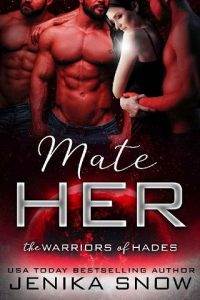 Minka was going to die.

She knew that with every part of her, and the fear of reality had her stumbling. She fell forward, her feet getting tangled in a grouping of thick vines. She landed on the ground hard, and a scream of agony left her as her wrist snapped.

The sickening crack of her bone breaking in two came through, and the nausea of the pain rose up like the violent, dangerous monster coming after her. Minka looked behind her, sweat dripping into her eyes as fear and adrenaline pumped through her veins at a fast, angry rate.

Despite the clearly broken wrist, she pulled herself off the ground and stumbled forward again. This time, she kept her balance, pushed the pain back, and moved forward. The rage-filled roar that came from behind her was coming closer, and she knew she had to pick up her speed.

The creature that followed her—a Razorra Beast that was big and nasty, with scales and talons as long as her legs and fangs as thick as her ankles—was starving, and she was the meal it wanted for this evening. It was one of the many dangerous predators that were native to this part of the planet she was on.

Although Arambria was a planet able to sustain human life, it was also deadly at every turn. When the small ship she had been on with a handful of other humans—a rare species anymore—set for the selling block in the alien slave auctions detoured onto this planet, she prayed to whoever was listening that she would just die right then and there.

She would much rather die than be the slave to a disgusting creature that would probably torture and maim her. And then as the cargo ship she had been on docked on this planet to gather some supplies, all hell had broken loose. Razzora Beasts, creatures of monstrous size that overpopulated this planet, had attacked the ship as soon as it landed.

It didn’t matter why the creatures attacked, because she used the distraction to escape while her captors had been engaged in combat. Many of the other humans escaped with her, and although there were deaths among them as they fled for their lives, they kept pushing forward. In the end, five humans survived, her included, and they now lived in a deserted cave they found nestled between an outcropping of jagged rocks.

She didn’t know how long she had been here and had been going off the rising and setting of the three suns of this planet. Twenty times, they had risen and set, and that was twenty times too long. This planet might be able to sustain human life, but humans were not meant to live on this wretched world. Finding edible food had caused sickness in a few of them, but they didn’t die, and now they were more conscious of what to search for to eat.

There was also a fresh spring that ran through the cave, which was a lifesaver.

Minka ran harder and cradled her injured arm to her chest. Sweat covered her from head to toe, and strands of her long, tangled rat’s nest of dark hair stuck to her forehead. She just needed to get to the cave where the rest of her group was. Today, she had been one of the people to get food for the others, and Jobe, the man assigned to go with her, saved her life by distracting the creature.

But she heard his death scream, knew he was in the beast’s belly right now, and if she didn’t get to the cave, which was too small for the animal to get in, then she would be joining Jobe very soon. The thick branches of these blue-and-black trees scraped along her arms, and she screamed out as the acid from the leaves touched her flesh.

The poison bubbled along her skin, and as much as she wanted to rub it away, the only thing that would neutralize the toxicity was water, and that was in the cave. She strived not to trip again, but the foliage was so damn thick and tangled. Her nerves were shot, and fear was stealing her breath.

“Help me!” she cried out, seeing the cave in the distance and the jagged outcropping of the entrance that would save her life. There were three heads that poked out of the entrance. They looked right at her, right at the danger that surrounded her, yet they turned and left her to die alone.

They moved back into the safety of the cave, forgot about her, and now she knew where she stood. She may not have been cordial with any of them, because this situation they were in left them fending for themselves. But she had been closer with Jobe. He had not only given his life for her, but before that, he shared meals with her, and she had been with him sexually once because she had needed an outlet for her emotions.