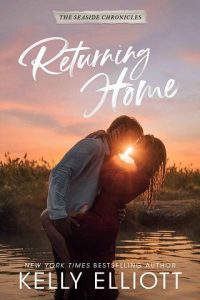 Gannon Wilson had to be the most handsome man in all of Seaside. His ash-brown hair and those deep brown eyes reminded me of my grandma’s famous hot chocolate. Nothing ever made me feel more warm and happy than her hot chocolate. Okay, that was a lie, because Gannon’s eyes made me feel the same way. When he looked at me, I could almost see into his soul. And when he smiled—oh Lord, it did crazy things to my stomach.

I was standing back by the edge of the parking lot, watching as Gannon said his goodbyes to his friends. Gannon knew everyone. He was that kind of guy. Never mind that he was the quarterback for our high school’s football team, or that he played baseball—he was simply kind to everyone he met. Popular, not popular, bookworm, or jock, he was friends with all of them. It was one of the things I loved most about him: his kind heart.

My younger sister, Sutton, and my best friend, Harlee, walked up and put their arms around me. With a sigh, Sutton said, “I still can’t believe he’s leaving today.”

I forced a smile, but no words would come. I had been dreading this day for the last couple of months, counting down until Gannon left to go to the Naval Academy.

“Have you guys made a decision on what you’re going to do?” Harlee asked.

A part of me didn’t want to share our plans. I wanted to be left alone with Gannon so we could enjoy every single moment until he had to leave. And I knew the moment I spoke it out loud, it would make it true.

“As much as we want to stay together, I don’t see how we can do it. I mean, I’m going to school in Orono, and Gannon is heading to the Naval Academy in Maryland. And after that, he’s going into the Navy. It’s not fair for either of us to have to do a long-distance relationship like that with no end in sight.”

“But, it’s you guys. Gannon and Adelaide. You were meant to be together,” Sutton said as she turned to look at me. Her eyes were so sad, and I was positive mine reflected the same emotion back. I forced myself not to cry.

“Trust me, Sutton, I don’t like it any more than you do. But we both have dreams of our own. I want to become a labor and delivery nurse and live in Boston. Gannon wants to go to school for marine engineering. He wants to be on ships in the Navy and then come back to Seaside and work as a boat pilot. That’s his ultimate goal, and he can’t make it happen unless he follows this path. Plus, his daddy was in the Navy, and he wants to follow in his footsteps along with Brody. It’s not fair for either of us to give up our own dream.”

Harlee and Sutton both let out the saddest sighs. I wanted to do the same.

“Tell me about it,” I said softly. I watched Gannon shake hands with one of the guys from the football team, then start to make his way toward us.

“We have to leave it up to fate.” I smiled at Gannon as he approached.

Harlee took my hand in hers and gave it a squeeze. “Well, if it’s meant to be, then maybe someday you’ll both end up back here in Seaside together.”

She smiled. “I am, because I don’t believe that a love like the one Addie and Gannon share can be extinguished so easily.”

I gave her hand a light squeeze back. “I love you, Harlee.”

“Love you back.” Turning to Sutton, Harlee said, “How about we head on over to the Seaside Grill for a chocolate shake?”

Sutton faced me. “You’ll be okay if we leave?”

My parents owned the Seaside Grill, one of the more popular restaurants in Seaside, right at the end of Seaside Drive. One whole side of the restaurant was made of windows that faced out toward Penobscot Bay. There was also a back deck with tables for those who wanted to enjoy the ocean breeze that came in off the water during the warmer months.

Gannon stopped in front of us and leaned down, kissing me on the cheek.

Sutton quickly wiped a tear away. “We’ll miss you. Have fun, Gannon. And please be careful.”

Gannon flashed Sutton a smile. “I will, Sutton. Have fun your junior and senior year. And whatever you do, if you get Mr. Hathaway, don’t ever fall asleep in his classroom.”

With a giggle, Sutton threw herself at Gannon and hugged him. He wrapped her up and looked at me with a soft smile.