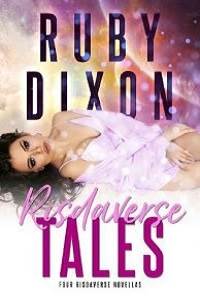 Though still carrying the scars of his past as an intergalactic soldier, Emvor doesn’t mind the quiet of his chosen life as a farmer. He doesn’t even mind that most nights are lonely on remote Cassa, but he does need help around his farm. A mail-order bride from his homeworld seems like the perfect solution. She’ll be a tall, sturdy female to help with the chores and bear his children.

Unfortunately, the person that arrives is Nicola. She’s small, delicate…and human. She also knows nothing about farming, and she's lied and deceived her way across the galaxy to get to Cassa so she can hide from those that would capture her. She's a problem, and also the most enticing thing he's ever seen.

Now Emvor has to decide…can he keep the woman who’s nothing like what he asked for but is everything he needs?

If there was one person I didn’t want to meet at the spaceport, it was Sanjurel. Cassa II was a small planet, with a very small population, but people like Sanjurel made it seem even smaller. There wasn’t a bit of local news he didn’t like, from whose crops were failing this season, whose meat-stock animals were running loose on the neighbor’s farm, to who was beating his mate.

I’m not the type to care about any of that. I keep my head down, keep my business to myself. After years of service in the wars, all I want is a nice quiet farm and a clear sky. Crops to grow. Stock animals to raise. A few credits in my stash. That’s all I need. Because it’s a small community on Cassa, people tend to get friendly and into each other’s business. Happens on all farm community planets. Unavoidable. So I keep to myself. Instead of going to community gatherings, I send along some extra food with a drone. Figure as long as I make a show of being neighborly, no one’s going to bother me too much.

But there’s no getting away from Sanjurel once he spots you. You’re in for a nice long conversation.

And since I walk with a heavy limp and my face is scarred up, I’m kinda hard to miss.

“Emvor!” he calls out, waving a hand. He’s spotted me before I could find a nice stack of freight to hide behind. Figures. I don’t alter my route, just tip the brim of my hat to him and hope he gets the message.

’Course, this being Sanjurel, he doesn’t get the message. The older man—a mesakkah like me—trots over to my side, his tail waving with eagerness. “Good to see you, son. Been forever since you’ve shown your head around these parts.”

“Yep,” I say quietly, continuing into the station, my datapad clutched tightly in my sweaty hand. I don’t want him to wonder why I’m here. Don’t keffing ask, old man—

“So what brings you down to Cassa’s little spaceport today?” he asks, all eagerness. “Getting some new stock in? Shipment from home? What?”

I grit my teeth, trying to figure out the best thing to say that won’t bring too much gossip my way. If I say stock, he’ll want to know what strain of seed or breed of meat-stock and if we can crossbreed it with local stock, and that will end up being a long conversation I won’t be able to get out of. Talking about home is out, too, because then he’ll want to tell me about the wars he went through as a young mesakkah, and that could take all damn day and I want to get in and get out quickly. “Visitor,” I say finally.

His eyes light up and I realize that was the wrong thing to say.

Kef it all. Now the whole planet’s gonna know that I’m bringing home a bride.

It’s something I’ve tried to avoid people knowing about. Not because I’m ashamed, but because it means talking and socializing, and I’m not much for that. I moved out to Cassa to get away from it all, and everyone keeps trying to bring it all back to me. I like my silence. I like my quiet house. I like my peace and not having to wake up in a barracks crammed full of other bodies, rushing to the facilities at the same time you are, sharing your space, breathing your air, talking all at once and interrupting your peace.

I’m not lonely for company, that’s for sure.

Well…okay, I might be a little lonely for a particular kind of company. That’s why I’m getting a bride, after all. I keep shuffling forward, wishing that my limp would let me move faster. Sanjurel moves slow, but I can’t seem to speed up fast enough to pass him. He’s too eager to hear more.

Gonna have a field day when he hears I’ve got a bride coming. Her name’s Shiarii and she’s mesakkah. Forty-five years old. Fit. Never mated. Is interested in children and farming. Understands that emotional connections aren’t a big priority.