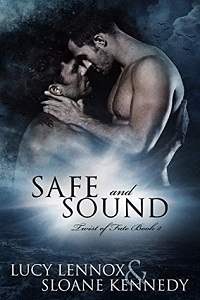 I opened my mouth to tell him I was coming, but a crashing wave sent me under the water and I choked as seawater attempted to fill my lungs. Muscles burning, I dove under the wave and fought the current that threatened to return me to shore.

“Aiden!” was the first thing I heard the moment my head cleared the water. I sucked in a breath and jerked my head in every direction, hoping against hope I could somehow see better in the darkness. It was only by some miracle I saw the outline of flailing arms in between swells.

Terror infused my blood, giving me more strength, and I plowed through the water. As another wave tumbled down on me, I dove fast and deep, but when I came up, it wasn’t the open sea I was in anymore. And the darkness of night had given way to daylight.

I knew that voice.

“Bennett?” I yelled in confusion as I whipped my head around to find my best friend. I flailed as I fought against the raging river I was caught in. Muddy water churned and slapped me in the face as I tried to maintain my equilibrium. “Bennett, where are you?!” I shouted.

God, please let him be on shore. I can’t lose him too.

“Aiden,” Bennett called, but his voice was much softer… weaker. I shouldn’t have been able to hear it, considering how loud the water was. But it was like Bennett was right next me.

I couldn’t reach him if I couldn’t fucking find him!

“NO!” I screamed at the top of my lungs. Because I knew what those words meant. I’d been hearing them for fifteen fucking years. “You hang on!” I demanded.

I would find him. I would save him this time.

Energy surged through my blood, and I managed to reach out and grab a branch from a stationary log along the riverbank. I dragged myself up enough to keep from going under and frantically searched for Bennett.

And then I saw him. Just a few dozen feet upstream from me. His dark hair was bobbing in the water, occasionally disappearing beneath it as he fought the current.

“Bennett, I’m here!” I shouted. I held onto the branch and drifted as far out into the current as I could without letting go. “Grab my hand!”

But he floated right past me, his hand just a few feet from my outstretched one. Time slowed down as his green eyes met mine briefly and I saw the words he couldn’t say.

“NO!” I screamed as I let go of the branch and made a lunge for him. “Stay with me, Bennett!” I begged as a sob caught in my throat. Frustration tore through me as my fingers brushed his, but he didn’t try to grab onto them. His blank eyes held mine for a moment before the water took him under.

I raged at him, the water, the world, and then surged forward with every last bit of energy I had left. The water clawed at me, but I fought it. A voice in my head told me to just let go… that it would be easier if I did. There’d be no pain, only peace.

I knew that voice.

Better than I knew my own.

And god, I wanted to go to it. I wanted to feel those arms wrap me in warmth and welcome me home.

“No,” I whispered. “Bennett… need to save Bennett.”

I let out one final scream and pushed forward with everything I had. My fingers closed around something cold and firm beneath the water, and I pulled as hard as I could. I fought the water for several long seconds before it gave up its hold on Bennett and his body hit mine. Wrapping my arms around him, I quickly turned him over, mindless of the fact that we were still caught in the river’s unforgiving current.

It didn’t matter. We were together. I’d gotten to him in time. Everything would be okay now.

But when I turned his motionless body over, it wasn’t Bennett’s face I saw.

It was my own.

I jolted awake, gasping for air, almost as if my lungs really were waterlogged. But instead of being trapped in a raging, swirling river somewhere in the heart of Colorado, I was sitting in my own bed in my posh apartment in Manhattan. My sheets were soaking wet, and I realized it was because I was sweating like crazy. My breath was still coming in ragged spurts as I grabbed my phone off my nightstand. I hit the speed dial button and put the phone to my ear. My fingers were shaking so badly I could barely hang onto the phone.

It was a dream, I reminded myself.