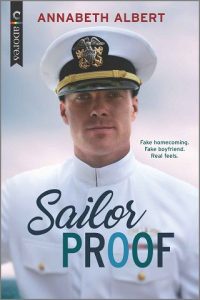 It was going to happen. Today was finally the day I was going to deck an officer and thus end any hope I had of ever making chief of the boat, and probably earn myself a court-martial to boot. But Fernsby had it coming, and he knew it, the way he met my eyes as he gave a cocky laugh. He might be a junior-grade lieutenant who had to answer to the other officers, but he wasn’t stupid. It didn’t matter how much he had it coming, a chief fighting with an officer of any rank over a personal matter was going to be harshly punished.

Fernsby had been goading me the entire long deployment, every chance he got, which considering the close quarters on a submarine was pretty damn often. And now here he was, joking with another officer about winning the first-kiss raffle for our homecoming, knowing full well that I was standing right there. And that he’d be kissing my ex.

And totally worth punching that smug smile away.

“I hope we go viral. Social media loves two hot dudes kissing.” Fernsby smirked as he waggled his eyebrows at the big-eyed ensign who’d been hero-worshipping him all damn tour. And of course he was smirking. First kiss was a storied tradition for most navy deployments, and sailors loved vying for the honor of being first to disembark and greet their loved ones. Usually I was happy for whoever won, and over the years I’d seen more than one proposal as a result of that first kiss.

God, I hoped Fernsby wasn’t planning that. Bad enough that he couldn’t stop ribbing me that Steve chose him over me and that I’d been the last to know Steve was cheating. Watching them be all happy was going to suck.

“I’m gonna get so lucky.” Fernsby’s knowing gaze met mine over the ensign’s head.

An angry noise escaped my throat. “And I hope—”

“Fox. A word. Now.” My friend Calder appeared seemingly out of nowhere in the narrow corridor and hauled me backward, effectively cutting off my tirade along with a good deal of my circulation.

“Yeah, Fox. Go on with you.” Fernsby made a dismissive gesture as I growled, but Calder kept moving, giving me little choice but to follow. He dragged me past various compartments through the mess, where two of our fellow chiefs were playing cards. He didn’t stop until we were in the chief’s section of the bunking with its rows of triple beds, steering me into the far corner by our bunks and about as close to privacy as we were going to get.

“What the fuck?” Calder wasted no time in unleashing on me.

“It’s nothing.” I looked down at my narrow bunk. I had the bottom bunk, another chief had the middle, and the top bunk was Calder’s. And I was more than a little tempted to disappear into mine and pull the blue privacy curtain. “Fernsby was running his mouth again.”

“You sure as hell looked like you were gearing up to slug him. I saw your clenched fist. I’m surprised smoke wasn’t coming out of your ears.”

Calder wasn’t wrong, so I shrugged. “I need to stop letting him get to me. I know.”

“Yeah, you do.” He shoved my shoulder the way only a longtime best friend could get away with. We’d been lucky, meeting up in submarine school, both getting assigned to Bremerton, and then ending up on the same boat together as chiefs. Calder had a vested interest in me not fucking up, and my skin heated from how close I’d come to doing just that.

“I’m pissed because it looks like he won first kiss and now I have to watch that,” I admitted in a low whisper.

“What you need is a kiss of your own,” said the guy who probably had different dates scheduled for each of our first three days home.

“Ha. Would be nice, but not happening.” It went without saying that I wouldn’t have anyone in the throngs of family and friends waiting on me. Simply wasn’t how my life was structured, and most of the time I was fine with it. Calder was the one who would have a big contingent of friends and family. And I was well-acquainted with his undying belief that the solution to one terrible relationship was to find another more casual arrangement. “I’m not exactly a rebound sort of guy.”

“Everyone knows that about you.” Calder rolled his eyes. He was both taller and broader than me, which was saying something because I wasn’t exactly tiny. However, his playful demeanor always made him seem younger. “But you should be. And I’m not even talking about getting laid. I’m saying you need to make Fernsby and Steve-the-lying-ex-from-hell jealous by having some hottie there to greet you.”

“God. I wish.” I let my head thump back against the panel where the bunks met the wall. Unlike Calder, I wasn’t counting down the minutes until I could get lucky, but I had entertained more than fantasy about how to pay Steve back. A rebound held limited appeal from an emotional standpoint. But jealousy? Yeah, I wouldn’t mind trotting out someone hotter than Steve, who always was a vain fucker. “But we’re only a couple of weeks out from homecoming, and I’m not exactly in a position to meet someone while we’re deployed.”