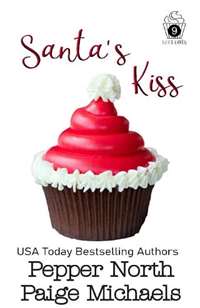 Stuffie love is wonderful, but it’s no substitute for a Daddy’s affection.
After investing in the store franchise of her dreams, Rose Stewart creates cuddly friends for stuffie fans of all ages. A true Little at heart, the only thing missing from her life now is the Daddy of her dreams.
Adam Connell needs a gift for his niece’s birthday, and with some holiday magic he finds so much more than just the perfect teddy bear at Stuff-It. The enchanting woman wearing a Santa cap and singing Christmas carols off-tune is the Little he’s long been searching for.

Rose was giddy as she skipped around her shop, Stuff-It, double-checking to make sure all the empty stuffie bodies were in their correct bins, the floor was cleared of fluff, and there were plenty of cute outfits arranged on hangers in perfect little rows.

She loved this time of year, and she couldn’t keep herself from singing Christmas carols as she spun in circles. Her current earworm was “Toyland.” She didn’t know all the words, so she just made them up, giggling. She was off-key and probably sounded like a warped vinyl, but she didn’t care.

Her last customer had finished filling his new fluffy friend fifteen minutes ago. The mall would be closing soon.

As she belted out yet another line about boys and girls and toys that probably made no sense at all, she spun toward the heavy gate, intent on dragging it across the front of her shop and locking up for the night.

Suddenly, a hand popped out of nowhere and landed on the heavy metal frame just as she was about to pull it free from its pocket in the wall. Rose gasped and nearly jumped out of her skin. The silly lyrics she’d been singing stopped short.

Heart racing, she leaped back, eyes wide as she stared at the large man looming close. Since her shop was located in the mall, she rarely felt threatened or unsafe. After all, even though most of the shops were closing for the night, there were still dozens of people milling around in the wide hallway.

“I’m so sorry, ma’am. I didn’t mean to frighten you.” The guy took a step back and held up both hands. He was breathing heavily as if he’d run through the mall to get to her.

He didn’t look dangerous. He looked…kind, actually. And sincerely sorry. He was big though. Broad and tall. Fit. He was also alone. He didn’t have a child with him, or even an adult.

Rose quickly estimated him to be about forty with a thick head of hair that was graying prematurely around the edges. He had a short trimmed beard that was grayer than the rest of his hair.

If she’d seen him anywhere else at any other time, she would have found him drool-worthy. Heck, part of her did now, but the hairs on the back of her neck were still standing up from his shocking arrival.

He swallowed and took another small step back. “I really scared you. I’m terribly sorry,” he repeated. “I got stuck in a meeting at work and couldn’t get to the mall any sooner. I really, really need a gift for my niece.”

The man drew in a deep ragged breath and continued, talking so fast it was hard to keep up. “It’s her birthday tomorrow, and she asked me for a Stuff-It. She’s only four, so I still dote on her for every birthday and holiday. I’ve never even heard of Stuff-It until this morning when she told me all about it while I was supposed to be working.”

When the man smiled, Rose finally regained some of her composure. He meant her no harm. He just needed a gift.

“Forgive me?” He lifted a brow and held out a hand. “Adam Connell.”

Rose glanced down at his large hand and took a deep breath before squaring her shoulders and standing as tall as she could. At five-five, there wasn’t a whole lot she could do to seem or feel larger next to Adam Connell. “Rose Stewart.” She hoped her voice didn’t shake.

“Nice to meet you, Rose. I can see you were about to lock up for the night. I don’t suppose I can talk you into staying open for a few more minutes to sell me a stuffed animal?”

She glanced around, noticing there were several shoppers talking near her shop. In addition, there were still about six customers in the lotion and candle store across from hers.

There was no reason to feel threatened. I’m fine. She finally smiled. “Of course. I don’t like to disappoint four-year-old nieces on their birthdays.”

Adam smiled broader. “Thank you so much. I owe you.”

As she turned toward the row of empty stuffie bodies, she bit her bottom lip. Adam was delicious. There was no denying the effect he had on her now that she was calm and had found her wits. Tall, dark, and handsome. He looked like the sort of man who would feature as the model on the front of one of her favorite Daddy books.

Stop thinking like that, Rose. Focus. Sell the man a Stuff-It without drooling over him. “Do you know what sort of Stuff-It your niece might like? Bear? Dog? Bunny? Another animal?”

When she tipped her head back to meet Adam’s gaze, she found him concentrating as he scanned the row of choices. “Hmm. I’m not sure, but I know the only color she’s interested in these days is pink.” He pointed at the bin of pink fluff a few feet away. “What’s that one?”