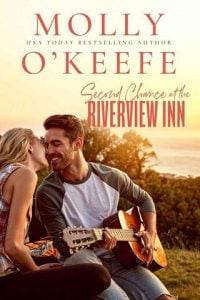 They stood in the kitchen of the Athens Organics farmhouse, a bright yellow room with faded wooden floors and breakfast dishes in the sink. The kitchen Helen had grown up in. The safest place in the world.

“And if I become…not fine?” Helen asked. There were so many ways the situation she was walking into could become not fine. A whole spectrum of socially horrifying moments ranging from vomit and spontaneous combustion to, and it seemed completely possible and painfully likely, bursting into tears.

Mom stroked Helen’s back like she was ten and home from school with a stomachache. It was comforting, if not weird, since she was twenty-nine. “Just find a cool dark place, gather your thoughts and you’ll be—”

She’d be fine because the worst had already happened to Helen. It was a law of averages kind of thing. Her fiance being killed in a car accident four years ago when Helen was five months pregnant had to insulate her against further disaster, right?

“Honey,” Mom said, the tone changing. Her mother was about to enable Helen putting on sweatpants and curling up with Bea to watch Encanto for the hundredth time. And she did not need to be enabled in that direction. She was doing this huge (but not really huge) thing. It was happening.

“Don’t honey, me,” Helen said, standing up straight and turning away from her mom to look at herself in the hall mirror. “I’m fine. We established that.”

Any other person in her shoes would be ecstatic. Over the moon. And she was. She was also just really nervous.

She was going to meet her favorite rock group—Band of Outlaws. And her favorite singer—Micah Sullivan. Just thinking his name made her insides gooey and her brain whirr. She loved his voice and his songs, and in a few hours she would be looking right at his face. His in-person face. His super-hot, kind of snarling, kind of smiling face with the scar along his forehead from a bar fight in his misspent youth, and his blue, blue sex eyes.

“How do I look?” Helen asked, turning to face her mom. “Should I change?” Again.

“You look perfect,” Mom said. Which, well, was a standard Mom answer.

“Am I too casual?” Helen thought about where they were going and who they were meeting. “Not casual enough?”

For a woman who’d spent five months in maternity pants and then three years in yoga pants, she’d lost the thread on What are pants? and Can I wear these out of the house?

Bea, Helen’s three-and-half-year-old daughter, sat at the kitchen island, eating toast dripping with jam. Bea was a more is more kind of kid, especially when it came to jam.

“What do you think, Bea?” Daphne asked, wiping the jam off her daughter’s face. “Is something exciting going to happen to Mommy today?”

“No.” Bea said her favorite word and shook her head seriously.

This was sweet and all, but Helen was kind of having a moment and she needed Mom to focus.

“Does it look like I’m trying too hard? I mean…” Helen pulled the hem of her favorite denim jacket that she legit wore to her first Band of Outlaws concert. And she wore her nearly threadbare Johnny Cash T-shirt. The one with him giving the finger.

That was cool, right?

AND she was she was wearing jeans. Her good ones. The pre-baby, pre-pandemic ones. That she could get them on was miracle and a testament to anxiety as an appetite suppressant.

“I don’t want to look like I’m trying too hard.”

It was the most rock-and-roll look she had. And she thought it was pretty good. But considering her age and single mom status, did that automatically make it lame? Probably.

Was she overthinking everything? Absolutely.

“Honey?” Mom walked back over to Helen, her beautiful long blond hair was turning silver and she didn’t look like she was old enough to be a grandmother. Those good Larson genes. Mom cupped Helen’s face in her hands. “You could not be more beautiful. You could not be more capable. You won’t throw up on his feet. You’re going to be fine.” She glanced down at her watch. “And you’re going to be late.”

As if cued, Helen’s stepfather, Jonah, honked the horn in the driveway.

“And listen.” Mom leaned in conspiratorially. “If the rumors are true…”

“Which rumors?” Micah Sullivan, lead singer of the Band of Outlaws had a lot of rumors attached to him.

“You know the ones.” Mom waggled her eyebrows.