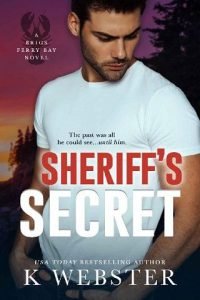 Sure, Dad filled my head when I was a child about the pride of being a law enforcement officer. How Brigs Ferry Bay relied on him and his deputy to keep the peace, protect the people, and arrest the bad guys. I’d wanted nothing more growing up than to be exactly like him.

Fast forward to my twenty-nine years of age and I’ve done it.

Because in becoming just like him, I lost myself in the process. I lost him. My once best friend and lover, Kian Abrams. God, it feels longer than a decade ago when I made my choice.

I’m feeling extra pitiful this blistery January day in Maine because I’m reminded of my mistake. I’ll have to sit in front of him for an entire hour, trying desperately not to drink in every detail about him, and run a goddamn meeting like my heart isn’t still bleeding since high school graduation.

It still bleeds. Every damn day.

“Yeah, Mr. Clementine, he’s right here,” Brie, my deputy, says, holding up her phone despite my shaking head. “Not busy at all. Just staring out the window.”

I flip her off and grunt as I walk over to her desk, stepping over my lazy German Shepard, Ox, who’s sprawled out on the floor snoring logs.

“Sheriff Bell speaking,” I greet in my most cordial tone I can muster on this fucking day. “How can I help you, Mr. Clementine?”

“He drives that damn cah that looks like a crittah,” the old man grumbles. “Fur, kid. There’s fur on it. Why does he have to park it right on Main Street? It’s a damn eyesore is what it is.”

Dad lied. There were no bad guys. Only grumpy-ass people who have nothing better to do than to complain about each other. My job is not what I thought it would be when I went off to Portland and joined the academy so I could follow in my father’s footsteps. By the time I got my foot in as deputy under my father, I quickly realized this wasn’t the job for me, but it was too late.

And then I can run for mayor.

My damn life is a joke.

“Are you making an official complaint?” I ask, stifling a sigh. “You know there’s nothing I can do. There’s no laws against a car with…unique…paint jobs.”

I glance at the clock, no longer wishing for time to slow, but instead wanting it to speed up so I can get off this asinine phone call. “Mr. Rhodes isn’t breaking any laws and he’s free to wear what he wants. If that’s all, I need to head out.” He blabbers some more, but I cut him off. “Goodbye, Mr. Clementine.”

As soon as I hang up, I glower at Brie, who’s giggling so hard, her face is splotchy red. Unbelievable.

“You’re such an asshole,” I mutter, shaking my head. “You know I hate when he calls.”

“But it’s so entertaining to watch you deal with that bastard. It really makes my day,” she says, grinning prettily at me like that’ll get her off the hook.

And no matter what romantic notions this town has about the two of us, she will always be just that. My friend. Her flirty smiles don’t work on closeted gays like myself.

“Aww,” she taunts. “You need Deputy Larson to hug it out and make it all better.”

“Go away,” I grumble as I make a grab for my thick, winter coat—that coincidentally did come from Bean’s. “I’m done with you.”

Her skinny ass hugs me from behind anyway, squishing her boobs against my back. Sometimes I wish I could just be straight for five minutes to convince myself Brie and I could be a thing. Mom would shit herself if I married the blond bombshell of Brigs Ferry Bay and gave her a million gorgeous grandkids.

Unfortunately, I prefer hard over soft.

No matter how much I try not to.

“Say hello to Kian for me,” she says, her voice genuine. “We should all go have drinks one day soon.”

I extricate myself from her surprisingly strong grip and pull on my coat. “Yeah, sure.”

“He’s lying,” a familiar voice chirps as he clomps down the stairs. “He’ll do what he does every Chamber of Commerce meeting. Grumble and groan and get through it with a grimace that’s already causing wrinkles on his handsome face.”

Rubbing my arm, I face Cato Rhodes. Mr. Clementine’s nemesis. Also known as the owner of And Puppies!—the pet grooming salon housed on the floor above our tiny two-manned police station.