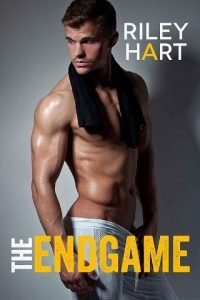 All I wanted to do was collapse.

It didn’t matter how many years I’d been in the league or the shape I was in—which was pretty damn good shape—NFL training camp was brutal. My muscles were on fire, an ache that throbbed bone deep. After a couple of weeks of hard-core workouts, fitness testing, and multiple offensive line drills and practices per day, it was over. Now the real fun began. The games. The competition. The hard hits, sweat, blocking, speed. The one place I felt alive. God, I fucking loved football. It was as vital as the blood in my body, and I knew I could never live without it.

I stood under the showerhead, scorching water pelting my skin. It was hot as balls—being summer in Georgia, after all—but heat against my body always helped work some of the pain away.

I took my time, staying as long as I could before turning off the faucet, grabbing a towel, and wrapping it around my waist. I padded across the floor to my locker. Most of my teammates—the rest of the Atlanta Lightning—were already dressed, bullshitting with each other or talking on their phones.

“Hawkins, you got plans tonight?” Darren asked, rubbing a hand over his shaved head. He was our quarterback and my closest friend on the team. We’d been drafted the same year and had spent our whole careers as teammates. As a tight end, I was part of the offensive line and helped protect the quarterback as well as receive passes. Darren and I had great chemistry together and had from the start.

“Nah, and I want to keep it like that. I can hardly move, much less go get laid.” Which I knew was exactly what Darren would want to do. It was what he always wanted to do. But my issues made things…difficult. I’d always thought the older I got, the more years I had in the league, shit like that would get better. My teammates got married—some of them more than once—had kids, and yeah, I guess in some ways it was easier because the pool of people who asked me to go out was now smaller. In the beginning, we’d all been young, and rich for the first time in our lives, and all they’d wanted to do was party, which always included fucking…something I was interested in, just not with women the way they were.

“What the hell, man? We’ve been training for weeks, and you don’t want to go out and relax?”

I grabbed my boxer briefs and tugged them on under my towel. Darren was standing naked in front of me. He always let it all hang out. I kept my gaze focused away from him, not because I wanted him—I didn’t—but because I felt like a piece of shit lying to him. If it ever came out that I was gay—I wasn’t sure how it would since I’d never let myself act on it—but if it did, I didn’t want my teammates to ever have something to hold against me. To ever wonder about “glances” in the locker room.

“You got one part of that correct. I’d like to relax. That means going home and staying in bed, not spending a night drinking and trying to get my dick wet.”

“You should always want to get your dick wet, Hawkins. I swear, you’re such an old-ass man sometimes.”

“And you’re such a kid sometimes,” I countered. “We’re twenty-six.”

I glanced his way and rolled my eyes, and we both laughed.

“At least you’re not crushing Mia’s dreams by getting serious with anyone,” he added.

Mia was Darren’s older sister. As my relationship with Darren evolved, I’d become close with his family and he with mine. We were both Georgia boys, both grew up without shit and probably still wouldn’t have shit if it wasn’t for our talent. Now we were fucking superstars, and we’d both been named eligible bachelors in some ridiculous magazine I couldn’t remember the name of. We took care of our families, though Darren’s was bigger than mine. I just had Mama and my younger brother, Elias.

But yeah, Mia had a crush on me. I’d told myself before that maybe I could make it work with Mia. I liked her. She was a sports agent, hilarious, outspoken, and loved football. If I could get serious with any woman, it would be Mia, but…I knew I couldn’t. I hadn’t tried. Putting her in that situation wasn’t fair to her.

“I don’t know why the fuck she likes your ugly mug,” Darren teased when I didn’t reply.

I flipped him off, then tugged a tee over my head and winced. Fuck, my body ached. I needed a massage, maybe an ice bath. “What can I say? She has good taste. I’ve heard I’m the sexiest man in the NFL.”