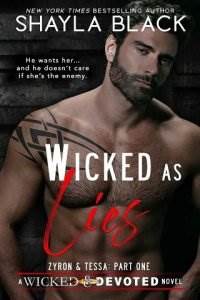 Chase Garrett, known to most as Zyron, stepped off his bike and locked up his helmet. His hands fucking shook. On the long walk up the shadowy path to the familiar front door, he let out a slow breath. Calm wasn’t happening.

He’d waited forever for the right to touch Tessa Lawrence. He’d been her friend, her co-worker, and her protector. But most of all, he wanted to be her lover.

Today, everything had changed. So tonight, that might finally happen.

Night enveloped him, chilly, still, and clear. Stars winked in a vast midnight sky. The world seemed to have stopped, as if it held its breath in anticipation. Or maybe that was just him, working to keep his lungs functioning and his head screwed on straight. Thoughts of Tessa made him hungry and desperate. Always had. He’d never craved a woman the way he did her.

Would she finally say yes?

At the front door, he knocked and told himself he wasn’t making a mistake. He wanted to do this. Yeah, but he had to do this. His bosses hadn’t left him any choice.

It took a minute, but the porch light came on. He sensed Tessa on the other side, saw a shadow pass in front of the peephole. Finally, she eased the door open. Her face was bare, her blond hair in a messy bun on top of her head. Her bottom lip was rosy and puffy, as if she’d been chewing on it nervously. She wasn’t wearing anything fancy, just a plain set of long-sleeved cotton pajamas in a muted green with a simple satin trim, but they hugged every curve of that body he’d craved for ten seemingly endless months. They also told him she wore nothing underneath.

All his blood rushed south. He started to sweat.

“Zy.” She sounded surprised, but she looked as if she’d half been expecting him. “What are you doing here? It’s getting late. Is everything okay?”

“Did you really think that, after today, I wouldn’t come?”

“Is Hallie asleep?” he asked of her infant daughter.

“She fought some, but I got her down about thirty minutes ago.”

He enjoyed spending time with the little girl, but she was a distraction they didn’t need tonight. “Good. Can I come in?”

She hesitated. “I don’t know if that’s a good idea.”

“Did you get a new contract today?”

Another hesitation before she nodded. “Joaquin emailed it to me.”

“Zy…” She bit her lip again, this time as if she tried to stop herself from answering.

He wasn’t letting this go. He’d waited for her. He’d wanted her. And he intended to take her. “Did you?”

“So did I, first thing this morning. The restrictions keeping us apart are gone.”

“There are no more buts, Tessa.”

Finally, she nodded. “How did you know?”

“The bosses told me.”

She wasn’t asking why they’d rewritten the employment contracts and rescinded the clause that had prevented them from having any non-work contact of a sexual nature. No doubt the trio of bastards they worked for had fed her some story. They were good at that. Probably why they were successful. No, Tessa wanted to know why they’d told him about her contract.

Because they want me to get close to you, to fuck you, and find out if you’ve been selling us out. Right now, I hate my goddamn job…but I want you more. “Because when they changed mine, I asked about yours. You know why.”

Good. “Can you think of a single reason I can’t come in, strip you down, and make love to you? Tell me right now.”

Even by the dim lights of the porch, he saw color flush her cheeks. “Did you mean what you said on Christmas Eve?”

Tessa dragged in a shaky breath as she stared at him with big green eyes. Finally, she stepped back, her baby-pink toe nails a soft splash of color against the white tile of her foyer. “Then there’s no reason at all. Come in.”

“Welcome to the jungle.” A smile played at Caleb Edgington’s mouth as the one-man welcoming committee waited, hand outstretched, just inside the office.

He shut the door behind him and shook it. “Thank you, sir. I’m happy to be here.”

“Come on in. Before I introduce you around, do you prefer Chase or…”

“I’ll answer to almost anything, but most people call me Zyron. Mr. Garrett is my dad, and Chase is a stupid-ass name. Not sure what my mother was thinking with that.”

The former colonel—and his new boss—laughed. “Zyron it is. Mind telling me where that nickname came from?”

He kind of did because he’d probably get ribbed for it, but since one of the people who had stuck him with that moniker worked here, Zy knew he wasn’t getting out of it. “Some of the assholes I served with in Afghanistan decided I looked like Zac Efron. I’m not sure it was a compliment.”