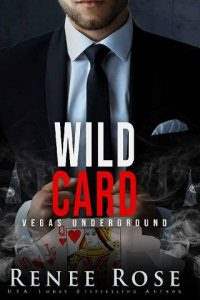 Fists at boob level, elbows back, I lead my dance cardio class through some booty shaking to the song, Sweet but Psycho.

“Step touch, throw your hand down in front,” I sing into the headset, exaggerating the movements to help the class follow along.

Dance cardio is my jam. I teach it four nights a week at the campus rec center and take other movement classes on the off-nights. Anything to keep me moving, which probably seems strange for a computer science geek.

It does border on obsessive, but it’s not one of those body-hatred kind of things. I’m not working out to achieve some body ideal or to look a certain way.

I just need to move. I have a hard time staying in my body, otherwise.

Dissociative disorder is the official diagnosis. I check out when things get intense for me. Movement helps. Pain and sex work even better.

But that doesn’t matter much, because my time is running out.

The siphon I put on the Tacone family’s casino business—the one where I skimmed a fifth of a penny from every transaction—got shut down two weeks ago.

And even though I used an off-shore account for storing the funds before they paid for my brother’s and my college tuition, there’s a decent chance I’m going to end up swimming with the fishes, as they say.

But I knew that going into my little revenge scheme.

“Wide second position, deep breath in.” I start the cool down. It’s always over too soon. I lead the class through the closing stretches and thank them all for coming.

“Thank you, Caitlin.” My students wave and smile as they leave. Here, I’m almost normal. I could be just like any of them. A pretty, wide-smiling graduate student getting her workout.

It’s when people get to know me a little better they see my crazy. Decide I’m the girl to give a wide berth around. Which is totally fine with me.

I grab my towel and head to the showers, picking up my phone to check messages. Not that I ever have any. It’s just an anxious habit from when my brother Trevor was still in foster care, and I would freak out if he didn’t contact me every day to let me know he was still alive.

It’s one of the many quirks I have the Tacones to thank for. The side effect of having a dad murdered by the mob.

Except now that I’ve had my revenge, now that they’re coming for me, I’m thinking I shouldn’t have stirred the hornet’s nest.

I was probably better use to Trevor alive than dead. Even if I did generate enough funds to pay our college tuition.

I’d better warn him. I dial his number and he picks right up.

“Hey, Caitie.” He’s the only person I let call me that.

“Yeah. Why wouldn’t it be?” It’s sometimes weird to me how normal he turned out compared to me. But he had a decent foster family. And he had me.

I had only ugliness and myself to rely on.

“Hey, I have to tell you something, but it’s going to be fine,” I say quickly, just to get the words out. I’ve tried to tell him four other times since the money got cut off, but chickened out every time.

“Um, I may have hacked a company I shouldn’t have messed with.”

“Oh shit. What happened? Are you in jail?”

“Nope, not jail. It probably won’t go that route. Do you remember who killed Dad?”

Trevor goes dead quiet. When he speaks, his voice sounds scared. “Tell me you didn’t.”

“I did. Anyway, they probably won’t figure it out, but if they do, you remember the place we used to say we’d meet up if anything bad happened with foster care?”

I don’t know why I’m speaking in code. It’s not like the mafia are in the locker room right now. Or bugging my phone.

“That’s what they say,” I remind him in a sing-song voice. “Anyway, nothing’s going to happen. I thought I should tell you just in case.”

“Maybe you should go hide there now.”

My chest warms. Trevor’s the only good in my life.

“Well, don’t. You know me—I can take care of myself. I’ll figure it out. Just be cautious about any texts from me and don’t give up my location if anyone comes asking.”

“All right. Be careful.”

“I will.” I hang up and shove my phone down in my bag before I strip out of my sweaty clothes and step in the shower.