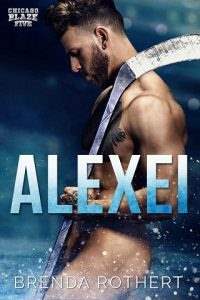 I must have one hell of a hangover. My alarm sounds like it’s underwater and my eyelids feel like they’re covered in concrete.

I try to tune out the alarm blaring from my phone. When it doesn’t work, I try to reach over to my nightstand and grab the phone, but my arm won’t move any easier than my eyelids.

Maybe it’s not a hangover. Am I knocked out on the ice right now? They may have to cart me off with a stretcher because there’s no way I’m gonna be able to stand up. If Mason McAllister knocked me out, I’ll jump that fucker’s ass as soon as I can stand, though. He’s a winger for Toronto, and he’s had it out for me since he found out his sister took me home after a game up there last year.

“I volunteer to give him a bath,” a female voice says.

There’s a chuckle and another woman says, “Get in line.”

I open my mouth to speak, but all I can get out is a grunt. And then, finally, after what feels like a fucking year, my eyes slowly crack open. The bright light shining in my face makes me squeeze them closed immediately.

I force my eyelids open again, squinting at her. She’s middle-aged, with graying hair and a warm smile. I mean…she’s not unattractive, but she’s quite a bit older than I usually go for.

Fuck. I must’ve gotten really hammered last night. I hope I was good in bed.

When I try to sit up, I can hardly move. This is the worst hangover I’ve ever had. Maybe it’s alcohol poisoning. Or maybe someone slipped something in my drink and fucked me up. Whatever’s going on, I just want to get the hell out of here and go sleep this off at home. There’s no way I can make it to practice this morning.

“Go get Dr. Harvey,” the middle-aged woman says to the one next to her.

I notice they’re both wearing pale green pajama tops and pants, kind of like scrubs. It hits me all at once—I’m in a hospital. The beeping wasn’t from my alarm, but from the machines I’m hooked up to.

That’s all I can make out so far. And since I can’t remember how I got here, my first instinct is to frantically check and see if all my body parts are still attached. But I’m still so groggy and slow that nothing’s moving as fast as I want it to.

“Alexei, you’re at Austin Memorial Medical Center,” the woman left in the room says to me. “My name is Sherrie and I’m a nurse here.”

When I try to speak, my throat is so dry I can’t make the words come out. Sherrie holds a cup with a straw up to my mouth and I take a sip, clearing my throat.

“You were in a car accident,” Sherrie says. “You’ve been in a medically-induced coma for around seventy-two hours now. The doctors wanted to give your body time to rest.”

I clear my throat again, using all my energy to get two words out. “How…bad?”

Sherrie smiles. “I’ll let the doctor talk to you about that. Just try to relax for now.”

My hospital bed is stationed at a slight upward incline, and I turn my head to survey my surroundings. It’s a regular old hospital room, almost every surface either beige or white. There’s a dry erase board with my name written on the top in blue marker, and the date scrawled beneath it is four days after the last day I remember.

A tall doctor with short dark hair comes into the room.

“Yeah, that’s to be expected.” He pulls a stethoscope from around his neck. “I’m going to look you over and then we’ll talk about your injuries.”

He pokes and prods me, and it’s all I can do to keep my eyes open. Sherrie looks on from the foot of the bed, and I realize then that we’re the only three people in this room.

My twin brother Anton’s not here. Martin and Laura, my adoptive parents, aren’t either. My coaches and teammates are also conspicuously absent.

Does anyone even give a shit about me? I’ve been in a coma for three fucking days and no one’s here to see if I wake up or not.

A car accident…I don’t remember that. The last thing I remember is driving past a bunch of cows on my way home from a bar.

Dr. Harvey puts the stethoscope back around his neck and pulls a chair up beside the bed. Not a good sign.